In this article, we're going to show you 7 breeds of cat that you'll absolutely die for. Read about them all and think about adopting! 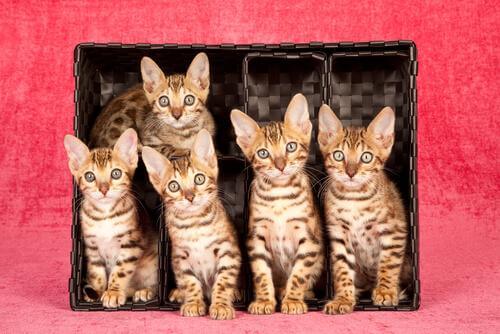 You should definitely read this article if you’re a cat lover. Or, even if your love is mostly for dogs, this list of our favorite breeds of cat might have you thinking twice about that.

Are you ready for a feline roundup? Read on to see our list of the cat breeds we’re sure you’re going to love!

You probably see pictures with gorgeous animals in them all the time on the internet and wonder “where do they come from?” Well, now that the world is so advanced, you can have one of them too, whether a dog or a cat.

But today, we’re going to focus specifically on the breeds of cat we think you’re going to fall in love with. Maybe you’ll want to get one!

Is that a leopard? No, it’s a house cat! It’s true, the first moment you see a Bengal cat you might think you’re looking at a true predator. That’s because this breed is actually a cross between cat and leopard.

They always have spotted fur and yellow-green eyes. They’re a bit wild and introverted, but Bengal cats are also curious, acrobatic, affectionate, and loyal. Plus, unlike other cats, they love water and baths.

We’re sure you’d love to have a blue cat, but, unfortunately, this breed’s name isn’t about its fur color. Well, maybe a little bit. It’s a kind of platinum color, but depending on the way the light hits it, it really can look blue.

Russian blue cats have a uniform fur tone: one single color that makes their eyes look even more amazing. But don’t be scared, they’re super playful and affectionate. If you let them, they’d play all day. But they also get bored pretty fast, so it’s best to alternate their toys and hiding the ones they’ve played with already.

This is another interesting breed that seems more like a wild cat than a house cat. Their fur has a few different earth tones that make them seem like tiny lions.

They’re very playful and very strong, and are like the Peter Pan of cats. Why do we say that? Because no matter their age or size, they keep on thinking they’re kittens, and act that way too.

If you’re one of those people who gets sad when your cat grows up from being a kitten, the Abyssinian is probably one of the breeds you’ll love most!

When people see a picture of this breed for the first time, they can’t help but ask themselves: “is that a stuffed animal?” Their dense, abundant fur makes them adorable.

Even though we normally associate them with older people because they’re calm and easy to care for, they’re also great for families and kids.

One hilarious thing about them is that they always sleep on their backs. Keep your camera around because we’re sure you’ll be able to get some great photos of it like that.

A lot of people call these cats “dog-like” and “puppy-like.” That’s because their personality and behavior often seem more like a dog’s than a cat’s. They’ll even wait for you at the door when you come home!

Plus, they’re very loyal and affectionate. Adopting one is like getting the best of both worlds: dog and cat in one.

This is a very interesting breed. They’re not Persian, and they’re not short-haired. But when you look at them, you want to give them a crown.

Their elegance and regal look make them extremely beautiful. In fact, there’s a good reason for that. Supposedly, they might have originated from when Marie Antoinette sent them to America as she fled France.

They may have been domesticated, but they still have hunting instincts.

Who doesn’t like Persian cats? Their gorgeous fur makes your jaw drop when you see them. They also have such a variety of eye and fur colors that just about everyone thinks they’re beautiful.

But this is also a very independent breed, and they can be unfriendly. So, just keep that in mind before you adopt one.

Hypoallergenic Cat Breeds
If you're allergic to pet hair but really want to adopt or buy a cat, you should definitely read this article to discover some hypoallergenic cat breeds. Read more »
Link copied!
Interesting Articles
Dogs
The Bergamasco Shepherd Dog Breed of the Italian Alps