All About The Amazing Great Pyrenees

Today we'll tell you about a magnificent, rather majestic dog breed: the Great Pyrenees. Continue reading to find out more about them. 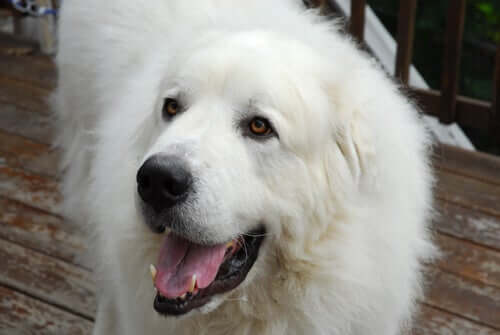 Today we’re going to talk about the Great Pyrenees dog breed. It’s one of those striking creatures you can’t stop looking at when you come across them. They are quite impressive in size, and have a strong protective instinct. They’re great as pets, however, especially when well-trained. Continue reading to find out more about them.

A brief history of the Great Pyrenees

The origin of this breed is quite remote. In fact, people have come across many fossils that date back to prehistoric times. The Great Pyrenees were sheepdogs for several centuries. But, the popularity of these dogs began to increase around medieval times.

These dogs also brought home the bacon by guarding French castles and pasture areas for hundreds of years. Then, the French king Louis XIV got into the picture and promoted them: he made them the official royal dog of the court of France. Of course, this increased their worth and their high demand in other countries. So, they began to serve as pets more than just sheepdogs.

Specimens of this breed are highly regarded as companion dogs and also greatly valued, in countries such as Australia and the USA.

This is a dog that belongs to a group of molossers. What this means is their size and musculature stand out from among the rest of their traits. These animals are also known as Pyrenean Mountain dogs in some places and are somewhat more stylized than other molossers. Generally, males are around 27 inches high, while females are about 24.

As for their weight, it varies between 110 and 132 pounds in males and 88 or 110 in females. As you can see, their height together with their weight makes them one of the largest races currently out there. Their powerful and compact legs are well adapted to moving throughout the mountains and on steep terrains.

Also, their thick fur is another one of their traits and gets long and curly in certain areas of their body such as their tail or neck. Their hair is mainly whitish (there are few of them who are true white). It’s very common for some parts of their fur to acquire some slightly yellowish, brownish or grayish tones.

The temperament of the Great Pyrenees

These creatures have the temperament of a sheepdog so they’re loyal and highly protective. They won’t hesitate when it comes to protecting their family members and will most likely bark at approaching strangers. Independence is another characteristic trait of the Great Pyrenees. It evolved with them throughout the centuries as they were solitary herding dogs.

This independence, together with their reputation for stubbornness and dominance can be a problem when trying to train them. So, it’s always best to begin while they’re very young. In addition, you must repeat the lessons firmly and consistently.

If you fail to do so, the dog might become a huge headache when they grow up. On the contrary, if you do it well, then you’ll have a sweet, calm and affectionate dog that’s particularly great with children.

In regard to their health, the Great Pyrenees don’t require special care other than brushing a few times a week as they constantly shed hair.

These dogs aren’t particularly active but you’ll still have to take them out for walks and let them off the leash from time to time. Keep in mind that large dogs don’t usually like enclosed, reduced spaces. So, these are only ideal if you live in a rural area with a fairly open area.