Home » Breeds » All About the American Bulldog

All About the American Bulldog

Today, we want to take a look back at the history of the American bulldog. We'll also tell you everything you need to know about caring for this popular breed.

Everyone’s heard of the English bulldog, those chubby, lovable dogs that are always smiling and drooling everywhere. But did you know that there are at least three different types of bulldog? Today, we want to take a closer look at one of these breeds, which is almost as famous as its English cousin: the American bulldog.

The American bulldog – the pet of immigrants

The bulldog was one of the breeds imported by immigrants arriving in the US in the 19th Century, as the English often brought their pets with them. After settling in the south of the country, the immigrants and inhabitants quickly began using them as guard dogs.

As a result, breeders decided it was time to move away from the typical chubby, stocky appearance long associated with English bulldogs. They began breeding them to take on a more athletic stature, while retaining their characteristic muscular physique. Despite the slight changes, they remained medium-sized, loyal dogs, albeit with a rather imposing appearance.

But don’t be fooled by their looks. American bulldogs are docile animals. For their owners, their great loyalty and protective nature meant they were the ideal guard dogs. 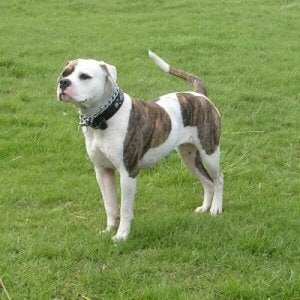 They were also trained to be great hunters. The plains and grasslands of the southern United States were full of pests and other animals that posed a threat to livestock and crops.

Due to the constant wars that plagued the world during the first half of the 20th Century, for a while, many people thought the American bulldog had gone extinct. Fortunately, the breed recovered, thanks to the efforts of two main breeders: Alan Scott and John D. Johnson.

As we’ve already mentioned, American bulldogs are medium-sized dogs, measuring between 20 – 24 inches on average. They have a rather heavy build, with males weighing anywhere between 75 and 110 lbs, and females weighing between 65 and 90 lbs.

In terms of physical characteristics, American bulldogs have large, robust heads – similar to that of a Pitbull – with a wide, pronounced muzzle. They have thick lips, a strong jaw, round eyes, and slightly drooping ears.

They have large, thickset, muscular bodies, sunken chests, and limbs in proportion with their size. In the past, their tails would usually have been docked, but this practice has since been banned in many countries around the world. They have a medium gait, their powerful hind legs allowing them to maintain a steady, effortless pace.

Their coat is short, smooth, and very easy to maintain. It’s mainly white in color, with brown, gray or black spots.

Bulldogs are highly intelligent animals. They’re extremely loyal to their owners, and can be rather protective of them, often defending them against possible threats. While many believe these characteristics might make them unsociable creatures, it’s definitely not the case.

If socialized with both people and animals from a young age, most American bulldogs will have no problem interacting with others as adults.

As we mentioned earlier, American bulldogs are really laid-back animals. So much so, in fact, that they often love spending time with children. They also need plenty of physical exercise to burn off any excess energy. If they don’t, they may start to develop unwanted behavior.

While they are relatively healthy animals, drastic changes in weather conditions can have a serious impact on their health. Furthermore, their large size and weight leave them susceptible to hip dysplasia, so it’s important to pay close attention to their posture.

We would also recommend keeping an eye out for skin conditions. Dirt and moisture can easily build up in their skin folds, so it’s best to clean them regularly to prevent infections. The same goes for brushing. You have to be consistent, and check for any parasites your bulldog may have picked up.

Like all animals, they’ll need regular check-ups at the vet. Any changes in mood or behavior can be warning signs that something’s not quite right with your pet.

Running of the Bulldogs and Bulldog Day
As canine sports become fashionable, initiatives such as Running with the Bulldogs brings out the spirit of cooperation of everyone involved. Read more »
Interesting Articles