The Braque Saint-Germain is the hunter every family needs. 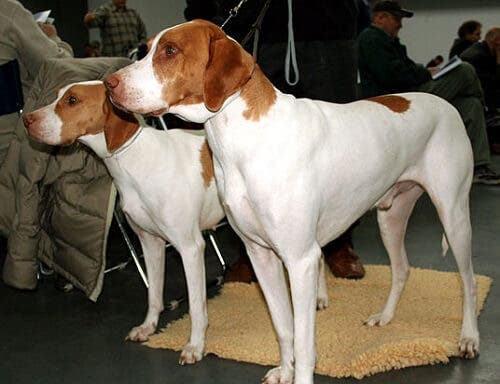 The Braque Saint-Germain is a classic breed, in fact, its ancestors were already around at the time of Louis XV. People preferred it because it was the ideal hunting dog — although many thought him a great companion as well. Continue reading – today’s article contains more details about this interesting animal.

The Braque Saint-Germain appears in 19th-century literature as a mixed breed. It’s something between an English and a French Pointer. In past centuries, their ancestors hung out with French monarchs and other members of the French high society. Some historians believe these are the dogs who grace the Louis XV paintings.

These dogs are originally from the Saint-Germain-en-Laye region in France. In addition, they’re wonderful hunters and have a rather docile temperament. The breed became popular in the mid-19th century when they began to appear in dog shows across France.

This led to the rise of the breed all the way to 1915 when the various groups and associations in Europe began to record the specific characteristics of the breed. People sort of forgot about the animal’s hunting abilities and opted to keep them around as companion animals mainly.

Physical characteristics of a Braque Saint-Germain

These dogs are a medium to large size, robust, and with an athletic build. Also, they’re highly energetic and adaptable to all types of situations and terrain. Here are some further characteristics:

Note that they also have a robust bone structure, which along with their long strong limbs, makes them ideal for their usual hunting job.

As for their stride, the Braque Saint-Germain has a light trot that’s elegant and well-sustained that sort of contrasts with their strong physique. They’re energetic and constant in their prancing when they hunt and can easily adapt to any terrain they may encounter.

In addition, their fur is short and coarse. It’s white with orange spots — the latter are usually in the areas of their ribs and ears.

These dogs are quite friendly unless you’re their type [of prey]. They’re also obedient and highly affectionate towards their humans and shy with strangers. In addition, they require minimal training as they’re quite intelligent.

As for their family life behavior, the Braque Saint-Germain is great as long as you give them the basic maintenance they require to maintain their physical condition. Actually, they’re quite popular among rural families.

Dogs of this breed are socially intelligent and usually get along well with other dogs and humans. Also, they’re ideal as jogging companions on sunny days and for evening walks at the park.

The Braque Saint Germain is quite resistant to many common dog diseases. However, they can experience serious discomfort when not properly cared for — hip dysplasia and other joint problems.

You must clean the animal’s skin folds, ears, and other delicate areas in order to keep it dry and avoid the proliferation of harmful fungi. One gentle brushing a week is enough to remove the dead hair from their coat.

Finally, this is a field dog and you must pay attention to a possible infestation of parasites such as ticks, as well as other elements that may be affecting them such as debris embedded in their paws.

European Dog Breeds – The Classics
Though most breeds come from Germany, France, and Spain, one could say that there's at least one specimen of a European dog breed from every country. Read more »
Link copied!
Interesting Articles
Cats
How Many Domestic Cat Breeds Are There?