Since Bambino cats are hairless, it's especially important to take care of their hygiene to protect them from diseases. These are energetic, playful, and affectionate felines. 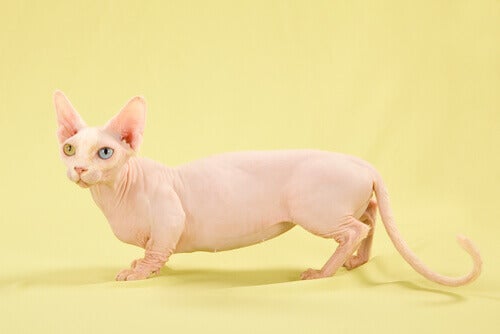 What do you get when you cross a bald cat with a short-legged one? The answer is the bambino cat, an animal without hair and with legs that are shorter than those of most of its species. Bambino cats are so adorable and loving that, as their Italian name suggests, they’ll remind you of a baby or small child.

A hairless animal with short legs

When American breeders Pat and Stephanie Osborne crossed a short-legged Munchkin with a Sphynx hairless cat in 2005, they were, without a doubt thinking of themselves, and not of the animals they were producing.

And this is true for all those humans who take advantage of genetic mutations that rarely occur naturally in order to create new breeds of cats, dogs or any other species.

How else can you explain the craze for creating, in this case, hairless kittens, who are so prone to skin problems and that suffer in the cold? And, on top of that, they have short legs, although their back legs are usually a little longer than the front ones.

Despite this, Bambino cats are already accepted by feline associations, at least as an experimental breed. What’s more, they’re more than welcome in any home that wants to have one as a loved and cared-for pet.

The Bambino cat is a small, hairless, short-legged cat that’s sure to win the hearts of the whole family with its fun and affectionate character.

Usually classified as a dwarf cat, bambino cats share their short legs with other breeds such as Dwelf, Minskin and Lambkin. They also stand out for their bald appearance, although they have an imperceptible coat of hair that’s as soft as chamois leather to the touch. And its skin, in general, is pink and wrinkled.

But it also has the following characteristics:

An energetic, playful and cuddly kitty

Without a doubt, the bambino requires a human family that will love it and that can give it all the attention it requires. Like all indoor cats, you have to think of games and toys to keep them entertained.

Sociable, funny, and affectionate, they get along well with children, older people, and other pets in the home. And, as is usually the case with many short beings, Bambino cats have a great personality.

Luckily, everything seems to indicate that their short legs don’t keep them from running or jumping around the house. However, they also love to be picked up and held, and will gladly take a nap on their owner’s lap.

Given the unique characteristics of bambino cats, it’s important to be aware of the special care they need. Like all bald kittens, the bambino requires regular bathing to keep its skin clean, supple and soft. The fact is that breeds with little or no fur usually shed a lot of sebum from their skin.

If hygiene isn’t regular, besides becoming sticky to the touch, the animal may have dermatological problems. For this reason, if the animal hasn’t gotten used to bathing from a young age, you can resort to using wet towels, according to the veterinarian’s indications.

Special care must be taken to clean their ears and eyes. And, of course, you should avoid exposure to the sun and cold. Plus you must feed them a diet appropriate to their characteristics. There’s a reason why nature insists on putting hair where humans want to remove it.

This breed is considered a healthy animal, with a life expectancy of between 12 and 14 years. And, for the moment, its short legs don’t seem to cause it any spinal problems. Just the same, being a recent breed, it’s not yet possible to establish reliably whether there’s a chance of developing diseases typical of the breed.