Home » Breeds » Cats » Keys to Strengthening Your Relationship with Your Cat

Keys to Strengthening Your Relationship with Your Cat

Cats are very independent animals and they like to be alone. Today, we'll give you some tips to help strengthen your relationship with your cat.

It’s not always easy to strengthen your relationship with your cat, but there are some keys to making it possible. When we think of cats, we usually think of them as independent and that they usually like to live separate lives.

Your relationship with your cat and feline loneliness

It’s pretty well-known that cats love their space and their “me time”. They like to do all of their activities alone and can keep themselves amused without anyone else. So, they need their space.

However, domesticated cats become subordinate to their owners and they then rely on them for many of their needs.

One of your responsibilities is to strengthen your relationship with your cat.

Sometimes, the relationship may feel very one-sided: they’ll stay by themselves when they want to and come to us only when they feel like it. But, as their owner, you have to keep track of all of their needs.

In return, they’ll reward you with their presence, their elegance and their acrobatics, as well as all of their mysticism.

Cats like to have their own space and safe areas. These are places they can go to and be calm without any interruptions; from the first day you bring a cat home, he’ll need his privacy. Experts agree that cats require at least two different places where they can hang out, seek privacy and explore.

Also, cats need to have a litter box. Remember, if you have more than one cat, you’ll need one litter box for each cat. There are different types of litter boxes depending on the space you have and your pet’s tastes.

Additionally, he’ll need an area for his food and fresh water that’s away from his litter box. If you put these two areas too close together, he may not eat his food.

Beds at different heights: It’s important to have one at ground level, but cats also like to have a second resting area that’s higher up. That way, they can see who is coming in and out of the door or what’s going on in the street through the window (that should always be kept closed).

His own time and individuality

Cats aren’t good with change. If you move houses, his bed, or a new person comes into the house, then he might not be too happy about it. So, make sure you let him adapt to the change at his own pace.

Also, make sure you’re respecting his individual character. Each cat has his own unique world and a very defined personality. Some of them may love to spend the entire day right by your side, while others will want to spend their lives furtively.

You shouldn’t try to make your cat do what you want him to; let him live the way he wants.

It’s also very helpful if you learn how to interpret your cat’s movements, body language and motivations. That way, you’ll know the best times to pet him and the times that he just wants to be left alone.

For example, if your cat’s eyes are wide open, it means he’s curious about something. He may also be especially happy. But, if he opens them too wide and his pupils are dilated, it may be a sign that he’s going to attack.

If he’s lying down and someone is petting him and he keeps his eyes half-closed, it means he’s relaxed and very comfortable. Times like these will strengthen your relationship with your cat. That means he’s a very affectionate and sociable cat.

Why do cats meow?

Small cats meow as a way of making themselves understood. To strengthen your relationship with your cat, you should understand that your cat can meow in different ways, tones, volumes, intensity and duration.

You should pay close attention to these differences in order to understand what they mean; this will help strengthen your relationship with your cat. Normally, if the meow is long, it means your cat is hungry. If it’s short, he might be scared. And, if it’s a strong meow, he wants to defend himself.

Do cats move their tails?

If a cat is moving its tail a lot, it’s a sign of discontent. When their tail is completely stiff and straight with the tip to one side, it means he sees something interesting.

If it’s absolutely straight, it means he’s very happy. And, if it’s low to the ground, almost touching it, then he’s being submissive. This could also be a sign that he’s sad or doesn’t feel well.

Cat’s whiskers can also show how they’re feeling. If he’s angry, he’ll bring them closer to his face and keep them immobile.

If you see that his ears are straight, but twitch in response to different sounds, it means that he’s happy. However, if they’re pulled back, he might be scared or defensive. And, if they’re straight and angled to the side, he’s getting ready to attack. 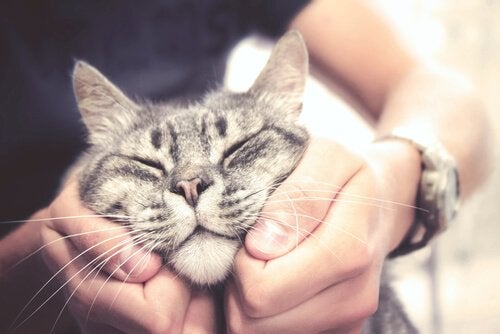 How to be Affectionate with Your Cat
Although many cats may seem to love affection, it's also true there are many different tricks and ways to be affectionate with them. If you are having problems doing so, then the secret is not to make your cat retaliate through scratching or biting. Read more »
Interesting Articles

The Fédération Internationale Féline is responsible for identifying and grouping cats according to their characteristics. In the following article, we’ll…

The Fédération Internationale Féline is responsible for identifying and grouping cats according to their characteristics. In the following article, we’ll…