Luscious fur in cats is for protection from low temperatures; as they usually shed, you must brush them at least once a week. 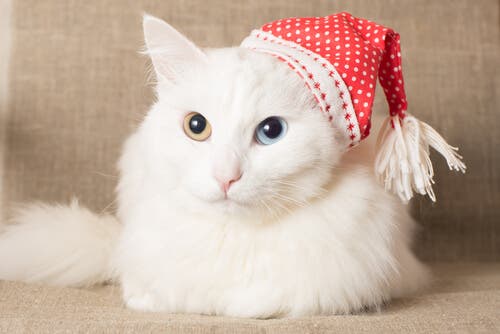 A cat’s coat is one of the most important features people pay attention to when choosing the breed they’d like to adopt as a pet. Some cat breeds have no hair at all while others have a lot of it. Today’s article is about the breeds with luscious fur. Are you ready for a house full of hair?

There are still many myths around cats. For instance, many people believe the black ones are scary because they probably belong to a witch. Of course, these magic women most likely keep them around to guard themselves against bad vibes.

However, the hair of these cats is more than just a visual attraction for humans. Its main function is to protect the animal’s skin. The coat often has two layers and the internal one provides heat, while the external one protects it from dirt and from the external elements.

You must brush your cat’s coat at least once a week as they constantly shed hair to keep it in good shape. That said, continue reading and find out which cat breeds have the most luscious fur.

This is a large North American breed and some specimens weigh up to 44 pounds. Their colors vary and they’re very popular in the USA. This a rather friendly playful breed that loves to frolic outdoors.

These cats are popular among rich people and they’re named after the ancient Persian empire, present-day Iran. They’re medium-sized cats and can weigh up to 20 pounds. Their coat is long, dense, and varies in color.

These cats are docile, remarkably intelligent, and spend most of their time chilling. You can’t expect too much from a rich cat, after all. Also, they get along well with other pets and species.

This is an old breed originally from the Ankara region in Turkey. The cats have abundant hair of varied colors but lack an inner layer. Those with white hair and heterochromia are the most sought-after specimens of this breed.

Of docile and intelligent behavior, the Angora cat perfectly tolerates living with up to two humans under the same roof. They don’t get along well with other pets in their household though.

4. Balinese cats and their luscious fur

This type of cat is originally from the USA and the breed is the result of the cross between a Siamese and some kind of long-haired cat — precisely from whom they inherited this characteristic. In morphological terms, the breed is similar to the Siamese and their colors are what stand out the most. The coat differs in volume though, and also in structure.

These cats are quite affectionate with their owners but distant from other members of the household. The truth is they’re intelligent and meek and it allows them to tolerate unwanted affection as long as it isn’t smothering.

This cat is originally from the USA and the result of the cross between Siamese and another European breed. Their coat is feathery and varies in length, and so it isn’t too complicated to maintain — contrary to what their appearance may lead to you to believe.

The main attraction of this animal lies in their peculiar ability to fully relax their muscles, giving them the appearance of a ragdoll. They’re quite friendly to all of their household members and don’t really use their survival instinct. In fact, they seldom react to danger.

This cat breed is from England. The animals are medium-sized and have a multi-colored abundant fur. Despite this, the Somali cat doesn’t cope very well with cold temperatures, so take that into account if you live in cold areas.

This cat likes to be active and you’ll seldom find them laying around. Also, they don’t like to be locked up inside a small place, so big houses are ideal for them. Finally, they’re quiet animals who hardly meow.

These cats are medium to large size, their silky abundant fur isn’t all too hard to maintain. They owe their physical appearance to their Burmese and Chinchilla cat relatives. In fact, they can have either of their colors.

This cat is the perfect human companion. This is because they can be affectionate and playful with everyone in their household. They do have one “flaw” though – you can’t leave them alone for long periods of time.

Hairballs are a big problem for cats with luscious fur

The biggest problem with these breeds is that they tend to lick themselves for grooming and end up swallowing their own hair by accident. So you must brush them daily in order to prevent hairballs as much as you can.

Cat Fur – Why Does It Change Color?
Genetics dictates the characteristics of cat fur. This is because an animal's genes are responsible for color, pattern, length, and texture of their hair. Read more »
Link copied!
Interesting Articles
Cats
The 5 Most Majestic Cat Breeds