The 5 Most Majestic Cat Breeds

These majestic cat breeds have an aristocratic or exotic aesthetic. Learn more about them and why so many people want to own these felines. 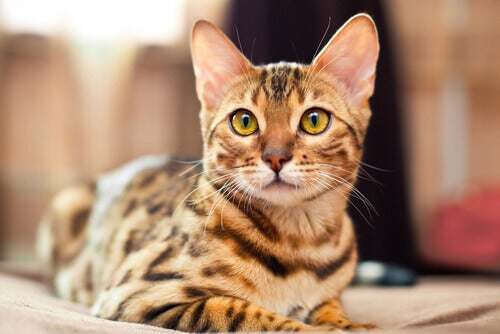 People love cats because of their curiosity, independence, and elegance. Some breeds’ athletic and aristocratic appearance draw potential owners in when searching for the perfect pet. These are the five most majestic cat breeds.

The 5 most majestic cat breeds

The International Feline Federation (FIFe) classifies this breed in category 3. It’s the result of a cross between a domestic cat and the so-called ‘leopard cat,’ a breed originally from Asia that’s known for its tabby coat.

The Bengal, whose scientific name is Prionailurus bengalensis, has a feral appearance that combines very well with its affectionate personality. This personality is typical of domestic cats.

Since this cat tends to follow its owner everywhere, many people compare its behavior to that of a dog. Also, unlike other cats, it’s a great swimmer.

In addition, the Bengal cat standard dictates that its tail and its abdomen should be spotted. Also, their eyes are usually gold, brown, or green.

Korat, a relic of Asia

Another one of the most majestic cat breeds is the Korat. They’re originally from Thailand and manuscripts dating back to the fourteenth century have been found describing this majestic animal. Despite that, the International Feline Federation (FIFe) didn’t recognize this breed until 1980. Currently, it’s classified in category 3.

This medium-large cat has a gray and bluish, short-hair coat and its eyes are sometimes green. This breed first came about naturally, meaning there was no human intervention. Also, this cat is especially active. It’s used to running, jumping, and hunting outside.

FIFe classifies the Persian cat in category 1. They have a lot of fur, a gracefully flat nose and a strikingly wide skull. Despite being small, its body is strong and robust and its large coat makes it appear larger than it is.

Coming from the city of Khorasan, they lived among the noble families of the Italian, English, and French. This unique track record has given this breed a reputation as an exclusive cat that belongs to the aristocracy. Its owners usually choose this breed for both pedigree and temperament, since they’re one of the calmest cat breeds.

Due to their lack of hair, people either love or hate the Sphynx cat. They have triangular-shaped heads and look completely different than other felines. Also, although they date back to ancient Egypt, FIFe didn’t recognize the current breed until 2002. They classified them as a category 4.

Because of its lack of hair, this cat breed has a higher temperature than the rest of the species. However, if you have one at home, you should consider covering it with some type of garment. That will help insulate it from the cold.

This cat requires a lot of care, not only because of the fragility of its skin, but also because of its highly dependent personality. Also, the rarity of this breed makes them very expensive.

FIFe classifies the Cornish rex in category 4. It’s a very muscular, slender, and proportionate cat breed. Its peculiar coat is wavy and can be a variety of colors, including orange-brown. Because of its very athletic appearance, this cat breed resembles a greyhound.

An accidental genetic mutation was responsible for this breed’s characteristic curly coat. As a pet, it enjoys company and is quite active. In addition, it has long, thin legs that give it a majestic appearance. They also have graceful ears that are slightly larger than average.

Cornish Rex, the Cat with Wavy Fur
The Cornish Rex, which comes from England, is slim and sleek-looking. But don’t be fooled; they're strong, and great climbers and jumpers. Read more »