Home » Breeds » Cats » Why Do Cats Love to Throw Things on the Floor?

Why Do Cats Love to Throw Things on the Floor?

Cats can be very mysterious creatures and can behave very strangely. Their love of throwing things on the floor is just one of their more curious habits. But why do they love to do this?

If you live with a cat, you’ve probably seen it happen before. Everything will seem calm, and then suddenly your cat will climb up onto a piece of furniture and start knocking over everything they find until something ends up on the floor. But have you ever wondered why cats love to throw things on the floor?

Why do cats love to throw things onto the floor?

If you’ve been lucky enough to share your home with a cat for some time and you’ve observed their behavior, then you’ll probably say the reason is “just because they feel like it”. And it’s true that our purring friends are well renowned for going about life certain of what they want.

We also know that they are naturally graceful and have a lot of skill. Therefore, they can’t claim that “clumsiness” is the reason so many things that cross their path end up on the floor.

Even if they are just being curious or love to run and chase each other, cats almost never leave anything in their path standing. But what exactly would make them want to push something so that it falls? Why would they purposefully swipe at a cherished belonging so that it ends up in pieces on the floor?

Do you have a cat that loves to knock things from the top of furniture? This post will try to explain why cats love to throw things on the floor.

Does a cat’s hunting instinct make it want to throw things on the floor?

There are at least three reasons why cats might want to knock things onto the floor.

One reason could be that, when cats hunt, they often play with their prey. If you’ve ever seen a cat trap a rodent or a bird, or even an insect, you’ll know what we mean.

Well, they might be doing the same thing with your belongings. If they think they might be their “prey”, they’ll knock your things around with their paws until, well, they fall.

Other reasons why cats love to throw things on the floor

Cats have a habit of putting their “handling” skills into practice, particularly when they’re bored. And throwing things on the floor can be good fun, apparently.

This is usually the case if a cat spends a lot of time on their own or if you don’t have enough free time to sit and play with them.

In these cases, a possible solution would be to get your pet a couple of cat-safe toys to keep them distracted. Cat scratchers, trees, or even just a box are good ideas too. An even better idea is to find them a playmate. However, nothing can guarantee that your cat will stop knocking things onto the floor. Their new friend might even become their accomplice, causing even more mischief.

A mischievous way of trying to grab your attention

Another reason why your cuddly cat might knock things over is simply because they’re trying to get your attention.

The idea that cats are independent creatures that don’t want anything to do with humans isn’t actually mirrored in reality. Anyone who lives with a cat will know how much they want and look for their owner’s attention.

And, as they’re so intelligent, cats know exactly what they need to do in order to grab your attention. One option is to throw things on the floor. Using this technique, they can be sure that you’ll soon be at their sides trying to figure out what happened. Has this happened to you? Well, you will have seen that cats achieve their goal in record-breaking time.

In any case, it’s important to bear in mind that you won’t make any progress by losing your cool, yelling at them or, even less still, hitting your cat for breaking one of your belongings.

It’s best to try to understand your cat’s character, as well as staying calm, and to try to find a solution as best you can.

By paying them more attention, or finding them a playmate or some toys to keep them busy, your cat will forget about throwing things on the floor. Well, at least for a little while! Even though you might cherish those belongings, they’ll never be as important as your precious pet, right? 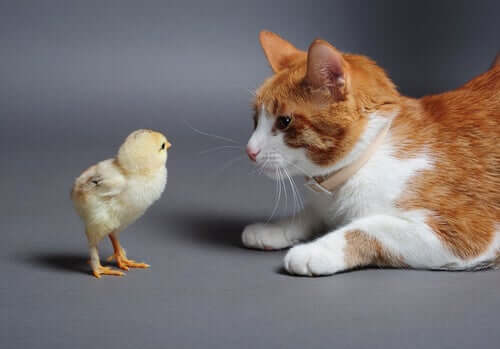 Why Do Cats Make a Noise When They See a Bird?
Sometimes cats make a noise with their teeth when they see a bird or other prey. But why? Find out more about these myseterious creatures here. Read more »
Interesting Articles

The International Cat Federation is responsible for identifying and grouping felines according to certain characteristics. So, in today’s article, we’ll tell you about the cats that belong to group IV of the FIFe Breed Standards. Check them out! FIFe Breed…