The Norwegian Forest Cat is one of the most beautiful and distinctive breeds in the world. We'll tell you all about them in this article. 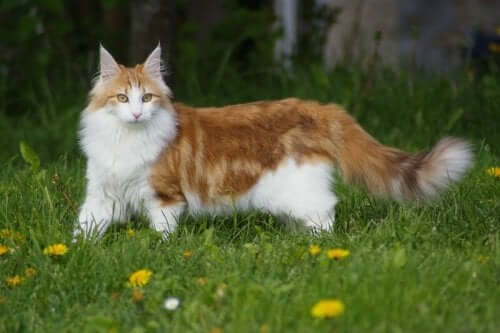 Majestic. There really is no better word to describe the Norwegian Forest Cat. Once found in the harsh Scandinavian wilderness, they have since become a popular pet in households around the world. Strong, agile and affectionate, these beautiful cats are famous for their dense fur, which was designed to help them withstand Norway’s freezing winter temperatures.

The uncertain history of the Norwegian Forest Cat

The origins of this wonderful breed aren’t entirely clear. Many believe that they arrived on Nordic soil in the 10th or 11th Century, brought back by Viking explorers. Evidence suggests that the hardy Viking voyagers discovered the Norwegian Forest Cat’s ancestors in the Byzantium region. They may well have brought them onto their ships to help control the numbers of rats and mice living in the hold.

Now on Scandinavian soil, the Norwegian Forest Cat became a favorite among farmers, helping to protect crops from pests. However, many escaped into the wild, where they slowly adapted to the extreme temperatures until they eventually evolved into the breed we know today.

The uncertainty surrounding their origins fed a number of myths and legends about the Norwegian Forest Cat. They came to be closely associated with ancient Norse gods, and featured in a number of traditional folk tales.

From the forests of Norway to the hearts and homes of cat lovers around the world, the Norwegian Forest Cat is true feline royalty.

If you choose to adopt a Norwegian Forest Cat, you’ll find yourself with a large, but surprisingly agile pet. Their tufted ears and fine facial features are similar to that of the lynx, while the thick fur around their necks is almost like the mane of a lion.

Their dense, water-resistant fur gives them an undeniably striking appearance. They also have long tufts of fur on their paws and ears to help protect them from the cold snow in winter.

Their bodies, paws and tails are larger than most cats’, while their claws are large and strong. Despite their formidable appearance, Norwegian Forest Cats have very delicate features and a gentle voice. They have long, pointed ears, long whiskers and large, gently slanting almond eyes.

Norwegian Forest Cats are happy, confident animals. They generally get on very well with other pets, and are great with small children. As well as being very sociable and communicative creatures, these cats are also highly intelligent, and famous for their fantastic temperament.

They are excellent hunters, willing to climb trees and swim rivers in pursuit of their prey. While they adapt well to life indoors, they enjoy having space to explore. If you don’t have a yard or other outdoor area, scratching posts and climbing trees are a great alternative, giving your pet a panoramic view of their home.

Laid-back, playful and affectionate, Norwegian Forest Cats quickly become one of the family. They love to get involved with family life, and will expect plenty of cuddles and playtime every day.

If you own a Norwegian Forest Cat, you’ll be pleased to learn that they generally suffer from very few health conditions. However, it’s important to keep a close eye on their weight to prevent hip dysplasia and other joint conditions.

These cats are fairly easy to look after, and don’t require any special care. Despite their long fur, they only need brushing around once a week to remove any knots and tangles. During molting season, however, you may want to brush them more often to prevent hairballs.

As with any animal, it’s best to take your Norwegian Forest Cat to the vet for regular check-ups to ensure they’re in good health. You’ll also need to treat them regularly for parasites, and ensure their vaccinations are up to date.

The Norwegian Forest Cat: A Surprisingly Unknown Breed
In this article, we're going to tell you about the Norwegian forest cat. This is possibly one of the oldest breeds in the world, and one of the least known. Read more »
Link copied!
Interesting Articles
Dogs
The Characteristics and Care of the Bullmastiff