All About the Segugio Italiano

Despite the fact that the Segugio Italiano has been mostly used for hunting for the last 2,000 years, the truth is that, due to neglect and abuse, it’s increasingly being adopted as a companion dog. 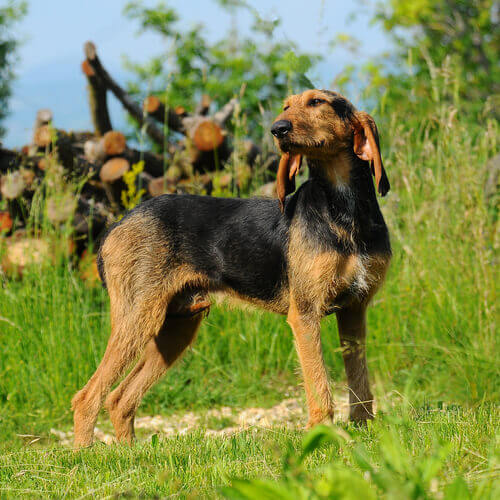 The Segugio Italiano isn’t just another tracking dog. In fact, it’s a very old breed, featured on centuries-old works of art. Its beauty, along with its work ethic, have made it an essential breed in Italy.

The history of the Segugio Italiano

The exact origins of the breed aren’t known. However, experts believe that it’s very old and that it’s been hunting and living in Italy for at least 2,000 years. They reached this conclusion after finding frescoes that represented it with its current shape and colors. It’s also in various paintings from the 17th and 18th centuries.

The characteristics of the Segugio Italiano

The Segugio Italiano is a medium-sized, almost big, dog. It measures between 20–24 inches to the withers. Healthy specimens weigh approximately 44 pounds. The sexual dimorphism is quite marked, as the females are notably smaller than the males.

It’s a dog of square proportions, with long and muscular legs. It’s robust but agile. This dog breed is slim and has hardly any body fat: even its tail is thin and fine.

The head of this dog is elongated, almost oval, and has a stop, a dividing “line” between the muzzle and the skull. The upper profile of the snout is convex.

It has big, elongated, and low-set pendulous ears. Like the rest of its body, its ears are fine and thin, rounded at the tip, and may be wrinkled.

The Segugio Italiano can either be smooth-haired or wire-haired. In both cases, the hair is straight, strong, and thick. The coat can be of several colors: tawny, black, or tan-black.

Behavior of the Segugio Italiano

This dog breed can hunt both alone and in groups. It likes living in packs, and is patient and friendly with other dogs, both known and unknown. Although it can be a bit distrustful of other humans, it’s very attached to its family and acquaintances.

The Segugio Italiano is an intelligent dog that’s easy to train, but it’s also stubborn and brave. This dog is very persistent, which is why you’ll need to focus on positive reinforcement training rather than use force or authority. This breed enjoys reward-based training and reacts much faster and collaborates a lot more with it.

As it’s also a scent hound, its sense of smell is tremendously important. This dog breed doesn’t tend to adapt well to city living and needs to follow tracks and identify smells to feel happy and relaxed. There are many interactive toys that can help meet this need in your dog if you can’t regularly take it on nature walks.

If this need isn’t meet, your dog will suffer stress. In addition, unwanted behaviors may appear, such as destroying things at home, since it’ll be looking for traces to follow, or excessive barking. Although people say that their barking is pleasant while they hunt, it can be quite bothersome at home.

Care of the Segugio Italiano

Despite its age, the Segugio Italiano breed is healthy. The risks and diseases typical of working dogs and dogs of its size can affect it.

On the one hand, possible joint problems, such as hip or elbow dysplasia, must be addressed. On the other hand, their floppy ears are prone to fungus and infection. A veterinarian must evaluate whether the dog will require a preventive treatment for both and should also teach the owner to clean their dog’s ears properly.

As it’s an animal that likes being outdoors, it’s very important to remember your dog’s internal and external deworming schedule, as well as to check its ears or legs for thorns, spikes, or splinters.

The Segugio Italiano has been working in the southern European countryside for centuries. Like many breeds intended for hunting, in recent years, it’s one of the breeds that has suffered the most neglect and abuse, which is why it’s also turning into a companion dog rather than a working dog.

The Different Hunting Dog Breeds and Their Qualities
Do you know the different hunting dog breeds? What must a dog have in order to be suitable for this sport? Find out in this article. Read more »
Link copied!
Interesting Articles
Dogs
Gordon Setter: The Most Beautiful Pointing Dog