All the Reasons Why We Love a Giant Dog!

They're gentle and noble, but if they sense a threat towards their owner, they will become very protective. 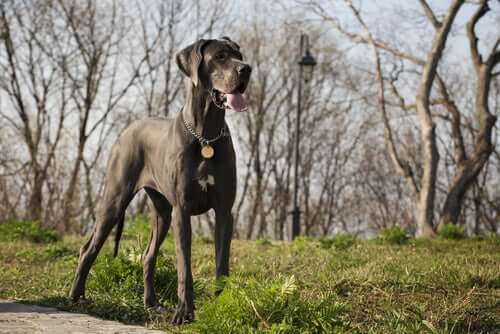 Big dogs are subject to certain prejudices that aren’t always true. The height of a giant dog actually makes training easier, even if you wouldn’t think so. They’re also more suitable for living with children.

A giant dog’s character and personality

One of the reasons people love a big dog, regardless of the dog’s size, is their behavior. There are even large dogs that move considerably less than a small dog at home.

Another myth is that large dogs can’t live in a flat or a small house. However, regardless of the size of the giant dog, there are huge animals that quickly adapt to an apartment or other types of housing with little space.

The dog’s height won’t decisively determine its personality. There are other different factors that will influence his character. Factors such as the breed or the kind of mix between breeds.

The owner’s personality is also an important variable that comes into play when adopting a dog. Imagine a dog owner who’s a fan of long walks and spending a lot of time outdoors. In that case, the ideal pet would be a big-sized dog who’s dynamic, active and vigorous.

Children can also be an influential turning point when planning to adopt a dog. Some animals are more suitable than others. Keep this in mind when choosing to adopt pets that’ll live in the house with your little children.

If there’s a baby at home, the child will be able to hold on to his giant friend during his first steps before walking. It should be noted that homes with children are usually not the most suitable for small dogs. Their size makes them very vulnerable to the antics of naughty children.

Logically, a big dog will suffer much less if the child in the house throws himself on top of it, grabs it by the tail, etc.

The best training for a big dog

The pace of life that most people have today can make it more useful to choose a large-sized dog. An energetic or lively person that loves long walks, as we have seen, can find the perfect companion in a dog of great size.

Another important detail is the fact that a tall dog can look at its owner almost at eye level. This is one more reason why big dogs are also easier to train.

It’s common sense that not all families can transport a giant dog from one place to another. Especially if they are used to traveling. It’s not the same thing to be accompanied by a small furry doggie than by one of great size.

The owner’s age and physique

The adopting person’s age and their physical condition are other reasons that can tip the scales for or against choosing a large dog. It isn’t easy for just anyone to handle a large animal.

Therefore, a dog that weighs over 75 pounds can’t be controlled by just anyone. If the person is elderly or doesn’t have the necessary strength, a walk in the park can turn into a nightmare.

It is said that dogs that are of large breeds can be, in many cases, more affectionate than small dogs. It does happen that small dogs can have a very nervous nature. In this case, they find it more difficult to establish a strong bond with their owners.

Statistically, large dogs show love for their owners more easily than small dogs do. For example, large dog breeds that are known for their excellent and affectionate character are the Dalmatian, the Newfoundland, and the Labrador Retriever.

If we’re looking to get a dog for protection and security aside from companionship, the best choice is a large dog breed or mix.  Dogs with a bigger physical appearance intimidate strangers more. They’ve also been accustomed to guardianship duty or protection for centuries.

Need any more reasons to love these gentle giants? We hope you enjoyed learning about them in this article. See you next time!

The Irish Wolfhound, The Giant of Dogs
The Irish Wolfhound is the tallest dog breed that exists. This breed was almost on the brink of extinction, so their genes were reinforced by the genes of the Great Dane, which is why it's taller even if it doesn't look like it. This an incredibly good-natured breed that's gigantic. Read more »
Link copied!
Interesting Articles
Dogs
The Tosa Inu: A Perfect Mix of Europe and Asia