The Gascon Saintongeois was first bred in the early 19th century in the Saintongeois region of France. Find out more about this impressive dog. 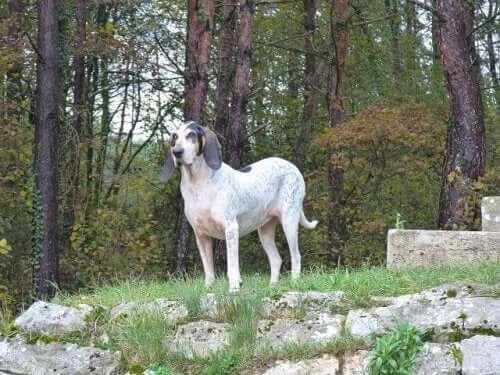 The Gascon Saintongeois is a French hound that is little known outside of France. It was bred to continue the legacy of a breed which is already extinct. They make excellent pets with their calm character and caring for them is fairly straightforward.

As its name suggests, this breed originally comes from the historical province of Saintonge. They came about during the 19th century after the French revolution thanks to Count Joseph de Carayon-Latour, who crossed the last remaining examples of the Saintonge hound with the Bleu de Gascogne.

They have the ideal body for hunting small and medium-sized animals, something which was very popular in the region. But, despite being natural born hunters, they also have an easy character and are mostly calm and passive.

Their size and attitude have made them excellent companions over the years. Dukes and Barons in the region kept them for company because of their elegant and stately demeanor.

The Gascon Saintongeois is large, robust, capable of adapting to any terrain, and displays a very elegant canter and stately appearance.

This dog is generally well-adapted for running at full speed over medium distances. However, its greatest strength is its sense of smell, which is very sensitive, as with all hounds.

The Gascon Saintongeois is a born hunter and feels more comfortable in a pack than alone. They’re very obedient and intelligent, making them perfect for hunting wild boar or deer. They were even used for hunting gray wolves in older times.

Although it’s a hunting dog, this doesn’t mean that they’re aggressive or restless. In fact, they’re very calm and well-behaved and love being the company of humans and other dogs.

It should also be noted that they’re very protective and territorial dogs, as well as being noisy. Combined with their powerful sense of smell, these qualities make them perfect guard dogs.

Similarly, they’re happiest in the countryside where they can run in complete freedom – something they can’t do in towns or cities. Their need for constant company stops them from adapting to urban life.

The Gascon Saintongeois is not very difficult to train because they’re so obedient and docile. However, they can certainly develop less controlled behavior if they’re mistreated.

The best way to train them is to focus on physical exercise to develop their muscles. It’s also a good idea to teach them basic obedience and socialize them from a young age so that they can get on well with humans and other dogs.

This breed of dog is particularly healthy and they have impressed vets all over the world. Their robust bones and strong muscles mean that they can be in action for hours without showing any fatigue.

However, since they’re a large breed, they do suffer from some problems associated with large dogs. These include a twisted stomach and shoulder or elbow dysplasia.

Special attention should be paid to their skin, especially their paws, where splinters, fleas, ticks, and parasites can all cause problems. Their skin can also harbor moisture and dirt which can cause an allergic reaction if not addressed.