The Shikoku: A Brave and Fun Dog Breed

This dog, despite being happy in general, can also demonstrate a strong and determined nature. Therefore, training by means of positive reinforcement is fundamental. The Shikoku arrived in Japan 3000 years ago and was used to hunt wild boars. 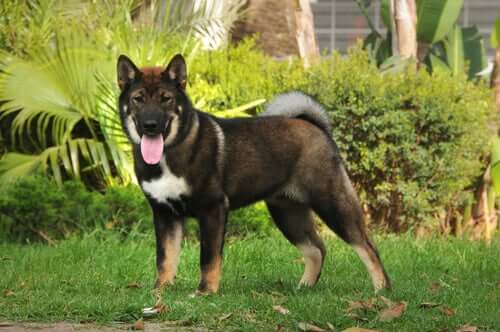 The Shikoku is a dog breed that originates from Japan. In fact, it got its name from the Japanese island of Shikoku. This breed is larger than other more well-known Japanese breeds and has a color pattern that’s unique among Asian dog breeds.

The history of the Shikoku

The Shikoku is a breed with a lot of history in its native country of Japan. Experts believe the animal arrived on Shikoku Island some 3000 years ago, probably from Japan. Its origin goes so far back that we can only speculate regarding an approximate time.

For a long time, three different varieties of this breed existed. However, the variety that remained the purest was the one that was living on Shikoku Island, given the existing lack of communication. And this is the same line that has survived to this date.

The Shikoku is a very agile and courageous dog that has been used in boar hunting almost since its origin. Today, however, they’re used as companion animals and guard dogs.

The characteristics of the Shikoku

In general, the Shikoku is a medium-sized dog with a well-proportioned, muscular, and compact body. It’s similar in appearance to the Shiba Inu, but is larger in size.

As for the animal’s head, it has a tapered snout, which is slightly shorter than the cranium. Its ears are high set, triangular, and stand straight up. Its ears have a little bit less mobility than other dog breeds and tend to be facing forward.

Like most Spitz-type dogs, the tail of the Shikoku is high set and curls up towards the animal’s back. This tail is thick and has hair that’s somewhat larger than the hair that covers the rest of the animal’s body.

Shikokus possess a double coat: The external layer is rough and straight while the inner layer is shorter and softer. It’s important not to cut this type of hair, as the double layer helps protect these animals from the cold and heat alike.

As for color, this dog breed comes in three variations of sesame, the typical mix of Japanese breeds like the Shibu Inu and the Akita Inu. In other words, common sesame with an equal balance between white and black hairs; black sesame, with more black hairs than white; and red sesame, with the inclusion of reddish hairs among the white and black.

The behavior of the Shikoku

Humans have used these canines as hunting dogs to hunt wild boar for many generations. Not only are they agile and courageous, but they also have a great deal of physical and mental energy. Therefore, they enjoy burning it off by playing and exploring their environment. When Shikokus get bored, they may become destructive. However, they make great companions when it comes to playing games.

Like many other Asian breeds, Shikokus possess a strong and determined nature. Therefore, it’s fundamental that owners teach their canines by using positive reinforcement. These animals won’t learn through punishment and force. However, they’re very intelligent when it comes to cooperation and they love to learn.

As hunters, Shikokus are energetic and perseverant. This temperament persists even when they live as house pets, where they are cheerful and fun. At first sight, they may not seem like affectionate animals. However, when they have families that respect them, they are tremendously happy.

There aren’t a lot of hereditary illnesses that affect the Shikoku that should be of concern to owners. Just the same, they do have a certain tendency towards experiencing eye problems, including retinal atrophy and hypothyroidism.

As with any other pet, owners should follow the indications of their veterinarian in regard to periodic checkups and the prevention of diseases, such as elbow dysplasia. What’s more, you should never overlook the importance of keeping your pet up to date with vaccines and worming.

Given that these animals possess a great deal of energy and a long tradition of hunting, it’s important to remember that you should inspect your dog’s body completely any time you return from nature outings. Pay special attention to the spaces around the padding on their feet and around their ears, as they may have burrs.

In animals that spend time in the country, it’s especially important to pay attention to possible parasites. Don’t forget that fleas and ticks can be carriers of serious illness. These pests can hide within your animal’s fur and on any part of your animal’s body.

What’s more, don’t forget that, given the type of coat that Shikokus have, they require brushing at least once a week. This will help to remove dead fur. In the summer, you should never cut their fur, as the shorter and denser fur of the inner layer serves to protect these dogs from the heat.

Shikokus may remind us of other Japanese dog breeds, but, while they share their distinctive nature, they have a unique physique. Respect your Shikoku and educate your pet by means of positive reinforcement, offering rewards for good behavior. If you do, you’ll have won yourself a faithful companion that will protect you all its days.