The Tosa Inu: A Perfect Mix of Europe and Asia

The Tosa Inu is a big guard dog that resulted from the crossing of several breeds. It’s very loving with and protective of its family. 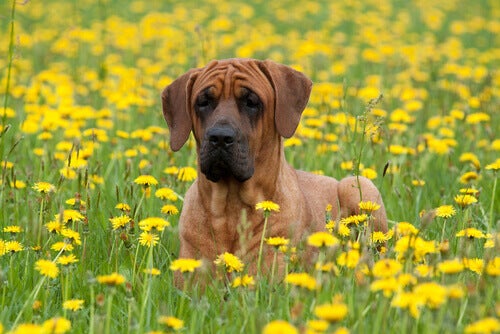 The Tosa Inu is a dog with an imposing appearance. It was created from selected European and Asian breeds to do a very specific task. Keep reading to learn all about this Molosser breed!

History of the Tosa Inu

The Tosa Inu is a relatively recent dog breed. In fact, to create this imposing dog, Bulldog, Mastiff, German Shorthaired Pointer, Great Dane, and Shikoku specimens have been used. Some sources indicate that Bull Terrier and Saint Bernard genes were also included.

This breed appeared in the Tosa province, in 19th century Japan. Humans designed it to be a great fighting dog, as it would have the imposing physique of the Great Dane and Saint Bernard, the stamina of the Bull Terrier and Bulldog, and the selfless and fearless character of the Shikoku.

In fact, it was a fighting dog for a few decades. Although dogfights in Japan continue being held in secret, the Tosa Inu has become a watchdog with a great life outside the ring.

The characteristics of the Tosa Inu

The Tosa Inu is a big dog, with an imposing and robust appearance. There’s no reference weight for the breed, as it varies in size. However, males and females must measure 23 and 21 inches tall, respectively. Although these aren’t official figures, this means that adult specimens, depending on their physique, weigh between 110 and 150 pounds.

Regarding its morphology, this dog’s head is broad. It has a square snout and a very prominent stop. It has a powerful and wide neck with hanging skin hangs, meaning it has a double chin. Its lips are also flabby, with a lot of excess skin.

Its ears hang on the sides of its head. They’re slightly rounded triangular ears set high on the head. The tail is long and thin; it’s wider at its base and tapers towards the tip. It’s straight and, at rest, it’s below the topline.

As for the proportions of its body, it has a broad chest. The belly, in comparison, is narrow, but it isn’t as exaggerated as that of greyhounds. Because of this, the back is straight and not hunched.

The coat on the Tosa Inu’s entire body is smooth, very short, and dense. It’s often red, brindle, or fawn, but it can occasionally be a dull black. In light-colored specimens, the snout may be darker than the rest of the body.

Behavior of the Tosa Inu

The Tosa Inu has become the perfect family watchdog, thanks to the inherited character of the breeds it was created with. Therefore, this dog breed is very attached to its family and protects the people it loves. In fact, it also protects land and its home.

However, the genes of the Shikoku give it a character more similar to that of other Japanese breeds, such as the Shiba or the Akita, than the mastiff. Thus, it’s a brave, tenacious, and independent dog that’s also a little stubborn.

Therefore, it isn’t a dog for everyone. The Tosa Inu doesn’t learn through punishment, force, or dominance. Instead, its character responds very well to positive reinforcement. Because of this, you should train it to make it collaborate with you, and not submit to you.

As a companion dog, it’s very affectionate with the people it cares for, but can be a bit reserved with strangers. Paradoxically, thanks to its fighting past, only the specimens that had a stable and predictable character and were very sociable with humans have been selected.

How to care for this dog breed

The Tosa Inu’s short and dense coat greatly facilitates its care. You won’t need to brush it when it’s shedding, since there’s no risk of knots forming and the dead hair will fall out on its own.

Similarly, this breed is generally healthy and doesn’t suffer from hereditary diseases. However, due to its size, it’s prone to hip dysplasia and gastric dilatation volvulus. You have to make sure a veterinarian establishes a check-up schedule and prescribes preventive treatment if necessary.

Also, due to its size, the Tosa Inu requires three long walks a day in order to stretch the muscles of its huge body and get the necessary exercise. In general, this dog isn’t energetic, meaning it doesn’t have to be induced to exercise. It meets its needs by playing with other dogs and taking adequate walks.

The Tosa Inu is a relatively recent dog that was born to fight. But thanks to its imposing physique and its value as a watchdog, it’s been able to survive the prohibition of dog fighting.

It isn’t an easy-going dog. Thus, only people who can handle positive reinforcement adequately, and who won’t try to subdue it with punishment, should adopt it.

Japanese Dog Breeds – The Most Common
Today we'd like to focus on the most common Japanese dog breeds. Note how many of their names have "Inu," as a second word, it merely means "dog."  Read more »
Link copied!
Interesting Articles
Dogs
A Dog’s Origins According to its Ears