The Barbone Dog Breed: All You Should Know 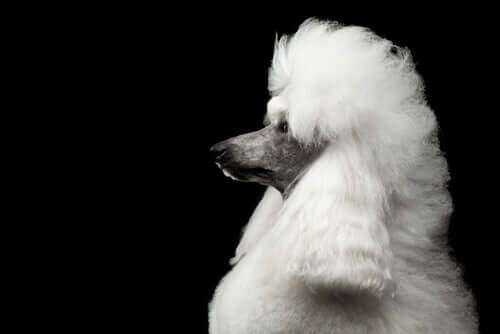 Did you know that the Barbone is another one of the names for the Poodle dog breed? Other names of the breed are Caniche, Chien Canne, Grosse Pudel, and of course, as you probably know, the French Poodle. Read on to learn many more interesting things you may not know about this fascinating breed, which is also France’s national dog.

The Barbone dog breed is originally from Germany

Despite its distinctly French reputation, the poodle originally came from Germany, where the breed was called pudel. This German word means ‘puddle’.

The breed originally worked as hunting dogs in Germany, where the word pudeln means ‘to splash in water’. The Standard Poodle started its career as a retriever dog (retrieving ducks that had fallen into the water) at least 400 years ago.

Historically, these dogs are working dogs

Today, the Poodle breed is synonymous with elegance and luxury. However, originally they were bred to be working dogs. Thanks to their thick, curly fur that protects them from the elements, and due to their fantastic swimming abilities and intelligence, the poodle was, and still is, a magnificent gun dog.

They even have a ‘soft mouth’. That means that they can retrieve a wounded or dead animal without damaging it. In France, the Barbone is known as the Caniche or ‘duck dog’.

The poodle’s distinctive haircut actually has a purpose

In former times, as we mentioned above, the Barbone dog breed had the skills necessary to be a hunting dog. Since they often had to jump into freezing water, they also needed adequate protection. Too much wet fur would make them too heavy, which would also make it more difficult to swim.

With that in mind, their owners used to clip their fur in a certain way. The typical poodle cut was meant to protect vital areas from freezing water while not adding too much weight to the dog while it was swimming.

The Poodle is the only dog that comes in three sizes: Standard, Miniature and Toy Poodles. These terms just describe the size of the dogs. The American Kennel Club doesn’t consider them different breeds.

In 1988 a competitor called John Suter entered the race with a team of sled poodles. However, they didn’t really do too well in the race. Due to issues such as curly fur getting tangled up with snow, and cold paws, many of the dogs on his team had to be left behind at checkpoints throughout the course.

This led to the race organizers making a new regulation. Only northern dog breeds such as Siberian Huskies and Alaskan Malamutes could compete. These measures were taken to guarantee the safety of dog breeds that aren’t adapted for extreme cold.

While most dogs shed their fur, the poodle’s hair just keeps growing. As a result, these dogs need regular clipping to keep their fur in order. If a poodle doesn’t receive regular hair cuts, its fur will become very tangled.

However, thanks to this particular trait of their hair, poodles are considered hypoallergenic, and generally odorless.

The Barbone or Caniche is one of the most intelligent dog breeds. In canine intelligence rankings, only the Border Collie surpasses poodles.

Their intelligence makes them very easy to train. In the past, they were even circus favorites. In the fourteenth century, animal trainers often dressed them in miniature human clothes and trained them to act out elaborate scenes.

8. Poodles can cause themselves harm because of anxiety or boredom

This breed is somewhat susceptible to the problem of obsessively chewing or licking paws. This can cause a variety of other problems, such as thinning fur, sores, and red, itchy skin.

Some poodles may lick or chew their paws until they actually start to bleed. Once your dog has an open wound, an infection could start that could cause a whole other set of problems.

There are various reasons why a poodle may do this. However, the most common causes are generally anxiety or boredom. You should consider providing more stimulation for your dog if you see that it has a tendency to lick its paws. You could schedule more playtime, walks, or buy or make some boredom buster toys for your pet.

So now you know some of the unique characteristics of the Barbone. They are certainly fascinating animals!

The Most Popular Dog Breeds – Characteristics
If you're thinking about adopting a dog then perhaps you'd like to know what are the most popular dog breeds. If only to make an educated decision. Read more »
Link copied!
Interesting Articles
Dogs
The Causes of Epilepsy in Beagles