The Papillon or Continental Toy Spaniel

With more than 300 years of history, this small breed has great health and an active, playful, and affectionate character. In addition, they perfectly adapt to family life. 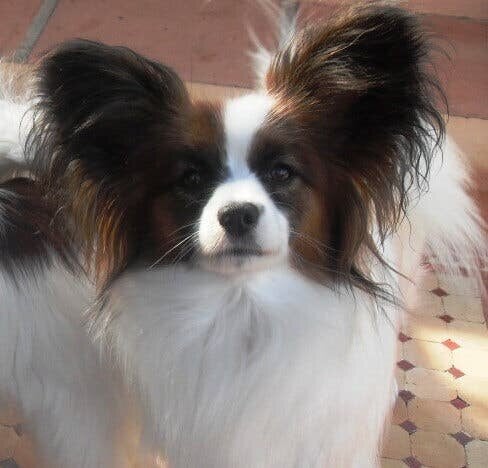 The Papillon or Continental Toy Spaniel is a small dog of Franco-Belgian origin. They also have ideal characteristics for living in an apartment. Here, we’ll tell you more about the origin of this breed, their appearance, and their character.

Origin of the Continental Toy Spaniel

Although there are no definite details regarding the history of the breed, experts conclude that this breed is over 300 years old. In fact, in some French paintings from the 18th and 19th centuries, you can see companion dogs that are very similar to the current breed.

Despite the breed’s long history, the breed only became official relatively recently in 1990. The Fédération Cynologique Internationale classifies the Continental Toy Spaniel in group nine.

This toy companion dog has a body that’s slightly longer than its height. However, their heads are proportional to the rest of their bodies and they have moderately long muzzles. The nasofrontal depression is clearly visible, especially in smaller specimens.

Ears are the most important trait to take into account when determining the breed of this dog. The Continental Toy Spaniel has two varieties: the Papillon and the Phalène. If the dog has high implantation with open ears oriented to one side, then they are a Papillon.

These two varieties are also distinguished by size:

Regarding their coats, the Papillon has an abundant single layer of fur that’s shiny and wavy. Their fur reminds us of the English Spaniel but it’s clearly different from the hair of a Pekingese Spaniel. Neither do they look like Pomeranians. They are predominately white but can have spots of any color.

The Papillon, like most small dogs belonging to group 9, is playful, affectionate, and lively. They also adapt very well to small homes, making them ideal pets in cities.

However, these dogs can be somewhat jealous and possessive. As a result, you need to socialize and train them, starting at a young age. They do get along well with children and adapt well to family life.

This breed has a delicate coat which requires certain care. We advise that you take them to a groomer at least twice a year to maintain a healthy coat. Likewise, we also recommend brushing the dog weekly so that they don’t shed much hair.

Despite their delicate appearance, the Continental Toy Spaniel is a resistant breed with no particular incidence of disease. However, to ensure your pet is healthy, you should take them regularly for veterinary check-ups. You should also ensure that they’re eating a complete and balanced diet.

5 Dog Breeds that Are Perfect for Small Apartments
While it is true that dogs adapt to where their owner lives, they also need some space to move. Which dogs are the best for small apartments? Read more »
Link copied!
Interesting Articles
Dogs
The Bergamasco Shepherd Dog Breed of the Italian Alps

Different types of respiration in animals are the result of species adapting to their environments. People tend to believe that…

Camels are generally herbivores. Their diets contain salt so they usually eat grass and salty desert plants. However, during times…

Animals
7 Mythological Animals and Their "Powers"

Dragons, phoenixes, and centaurs are just some of the best-known mythological animals. However, there are so many more! In this…