If you're a cat lover, then you won't want to miss today's article about the sweetest cat in the world: the Scottish fold. 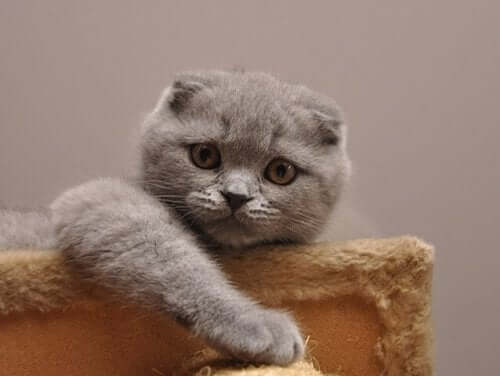 Cats are lovely by nature. But the cat we want to tell you about today is one of the most beautiful breeds in feline history. We’re talking about the Scottish Fold, a cat with a sweet appearance and a friendly personality. Do you want to know more? Keep reading!

Discover more about the Scottish Fold

It’s not hard to guess where this cat comes from. As its name implies, these felines are originally from Scotland. In the 1960s, two farmers found a rather unique kitten on their farm whose ears were flopped forward. They named her Susie, and decided to create a breed with her same floppy ears.

They managed to achieve their goal by crossing the cat and her kitten with British Shorthairs. Their plan was effective. In 1966, just five years after finding Susie, they were able to register the first kittens with the Governing Council of the Cat Fancy (GCCF). They called their breed the Scottish Fold.

The unique shape of this cat’s ears is what made this breed so well-known. It quickly gained the approval of all, until the GCCF finally revoked the Scottish Fold’s registry in 1974. The reason was that of serious arthritic deformities that some of the cats suffered in their legs and tails. They blamed these deformities on the same dominant gene that produces the breed’s floppy ears.

The cat possesses beauty without vanity, strength without insolence, courage without ferocity, all of the virtues of man without his vices.

However, breeders soon discovered that the problem was actually the result of crossing these cats with their own breed. However, breeding them with another primary breed kept the deformities from occurring.

Characteristics of the Scottish Fold

Scottish Folds are medium in size, and their feet stand out because they’re large and round. Their ears bend forward due to a dominant gene mutation that affects the cartilage in their whole body. This is their most defining trait. However, it’s good to know that when they’re born, the kitten’s ears bend backward. But don’t worry, they’ll bend forward within a few weeks.

Their eyes are large and round. However, many claim that their eyes look bigger than they actually are because of how small their ears are in proportion. It’s also interesting to note that their eye color almost always coincides with the color of their fur.

Their fur is very soft to the touch and short. However, there is another variety of this breed with longer fun–the Highland Fold. Federations accept any fur color.

The external appearance of the Scottish fold is a perfect representation of its personality. These cats are tender, friendly, affectionate, sweet, and calm. They are also obedient and easy to train. Living with them is a source of harmony and peace.

These cats also stand out for how silent they are. Even when the females are in heat, they don’t make a sound. When they do meow, their voices are sweet and melodic. They get along perfectly with people and are the ideal pet for families with children. What’s more, they get along great with other pets, no matter what kind they are.

If you have more than one Scottish Fold, you’ll quickly observe that they stay together all the time. These cats do everything together because they’re used to living in clowders (groups) and following a leader. In this sense, they are very similar to dogs

Scottish Folds are the perfect cat to have as a family pet. It doesn’t matter whether your home is large or small, or if you have children or other pets. These cats adapt to any space, and are as sweet as can be.

How to care for your Scottish Fold

The Scottish Fold doesn’t exhibit any serious health problems not that experts have solved the arthritis issue. They are strong, have good health, and are resistant to illnesses.

However, there is one aspect that owners need to pay special attention to: their ears. Because of their particular shape, it’s very easy for them to accumulate dirt and grim. This, in turn, can cause infection. So, owners should check their ears constantly and clean them regularly with a moist cotton ball.

What’s more, it’s important to brush their hair on a daily basis to eliminate dead cells. Doing so will help to maintain its appearance and shine and prevent the formation of knots and mats.

So, now that you’ve discovered this sweet, loving breed, what do you think? If you’re considering adopting a cat, there’s no doubt that the Scottish Fold can be a great companion and pet for the entire family. 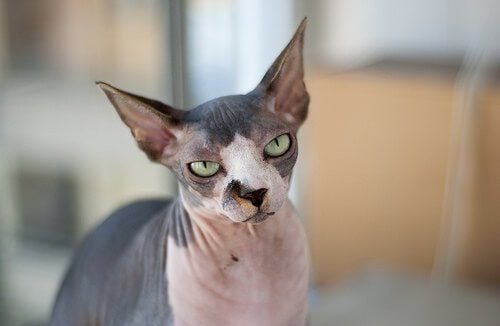 Are Cats Exotic Animals?
It's not easy to keep track of the strangest and most unusual cat breeds in the animal kingdom, so below you can take a look at the list of the 4 most exotic cat breeds. Read more »
Interesting Articles