This hunting dog was on the verge of extinction during World War II and due to the breeds few characteristics; active, intelligent and eager to learn, they’re a great family dog 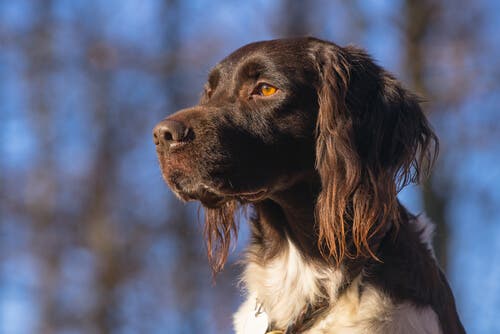 Whether you are looking for a new hunting dog, or simply a fast and energetic breed, the small Münsterländer is perfect for you. This hunting dog, from the German region of Münster, specializes in shows and hunting.

Origins of the small Münsterländer

They were created in the German region of Münster from long-haired Pointer Germanic breeds and the so-called Wachtelhunds long-haired spaniels. Its characteristics were not defined until 1921.

Curiously, the small Münsterlander has a link to the German writer and poet Hermann Löns, who, together with his brothers, sought the last of the so-called red brachus of the Hannover meadow, also called Heidewachtel or German Prairie Spaniel.

The first results from breeding this animal were visible in the early 20th century, thanks to Count von Bevervörde-Lohburg. In 1912, the Association of the Small Münsterländer show dog was founded.

The objectives of this association were to promote the purity and high-level breeding of the small long-haired show dog. This slogan became important especially after the Second World War, as the combination of lack of food and the rare characteristics of the breed led the small Münsterländer to the brink of extinction.

The body of the small Münsterländer is harmonious and elegant. Their upright posture shows off their musculature and the noble posture of their tail. These characteristics mean they’re agile and fast, making them cherished hunting dogs.

The International Cynological Federation classifies this breed in group 7, Continental Pointing Dogs of the spaniel type. Males can grow to a height of 21 inches, while females tend to be 20 inches. These measurements may vary by about half an inch.

A small Münsterländer’s coat should be smooth or, at least, slightly wavy. It also needs to be short and thick, because it needs effective protection for open-air hunting. The standard supports the following colors:

Behavior and habits of the small Münsterländer

They’re an intelligent breed that’s eager to learn. The character of the small Münsterländer is balanced and stable; moreover, they’re usually attentive and friendly to people, making them great family pets.

As for its behavior during hunting, this animal has a strong guiding instinct and a good adaptive capacity, ideal for teamwork. Their alertness and knowledge allow them to concentrate on the task at hand without being distracted.

Like every hunting dog, the small Münsterländer can run for hours. Therefore, they need a good amount of daily exercise that allows them to channel all that energy.

We shouldn’t forget that this breed is a hunter by nature, therefore, they need stimulating games and appropriate training to channel their tracking and hunting instincts. Therefore, you should start training them at an early age so you can shape their stubborn personality.

They’re a very popular breed in the United States. In the USA, you need certificates and evidence to prove that an individual meets the standards of the breed. The association responsible for this, the American Club of the Small Münsterländer, has an evaluation committee that determines the purity of the breed.

This club is also associated with the Orthopedic Foundation for Animals, which determines whether the animal’s hips are in perfect condition. Due to these rigorous controls, inbreeding and hereditary diseases of this breed are often minimal.

The Large Münsterländer: A Versatile Hunting Dog
The large münsterländer is native to Germany, and its survival over centuries is due to it being very suited to a very specific type of hunting. Read more »
Link copied!
Interesting Articles
Dogs
The Causes of Epilepsy in Beagles