Why Do Goats Climb Trees in Morocco?

In nature, no behavior dictated by natural selection is random. Goats climb trees in this region for clear reasons. 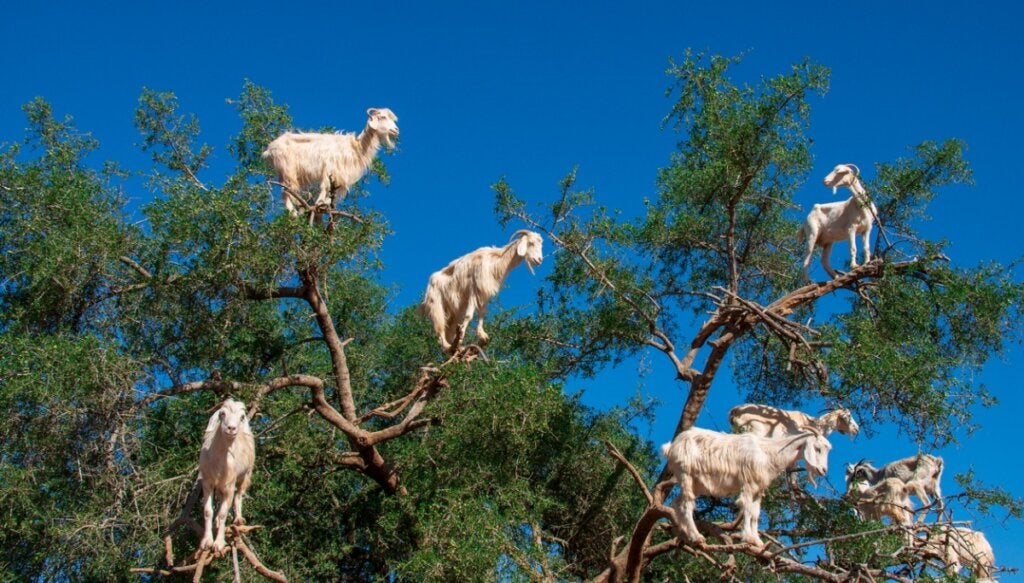 Goats climbing trees may seem totally implausible. As agile as they are, swaying branches don’t seem like a place for a hoofed animal, do they?

However, in Morocco this phenomenon has been observed for years: goats climbing on trees up to 10 meters high. How is that possible? What evolutionary advantage does this behavior suppose? Discover the secret here.

You might think that the goats in this region are a different species that has developed some kind of evolutionary mechanism that makes them capable of climbing trees, but they aren’t. Moroccan goats are domestic goats (Capra hircus), no more, no less.

The goat is a small mammal that lives almost everywhere in the world, mainly in mountainous areas. These bovids exist both in the wild and are domesticated by humans and, although there are a multitude of races depending on the needs, they all belong to the same species.

Regarding their diet, they prefer grasses, but they won’t turn their noses up at whatever vegetation is more available at that time, as they spend 5 to 9 hours a day feeding. Being a species that easily adapts to extreme climatic and geographical conditions makes it easier for goats to obtain food in areas that are difficult to access.

Goats are gregarious animals that live in large groups and are also quite prolific, since they can breed throughout the year. They reach sexual maturity at 2 years of age and the goats suckle until 4-6 weeks of age.

So why do goats climb trees in Morocco?

In the dry season of southwestern Morocco, grasses are scarce – even disappearing completely in some areas. In any case, despite the climatic difficulties, there’s a tree prepared for this time of year, which is armed with thorns and thick leaves to survive: the argan tree ( Argania spinosa ).

For this reason, goat herders have taught their animals to climb the low branches of this tree, so that they can feed on the shoots and fruits. Goats, no matter how agile they are, aren’t really prepared to climb trees, but hunger is pressing in the dry season.

This is beneficial for both goats and humans. They obtain food, and farmers obtain argan fruits. In the following lines, you can read why these trees and not others have been selected for this curious symbiosis.

The Moroccan goats climb the trees for a symbiosis which is both nutritional and utilitarian.

What’s so special about the argan tree?

If you know a little about the world of cosmetics and perfumery, you’ll have heard of argan oil. The argan tree produces a fruit from whose seed this oil is extracted, and it has a high content of vitamin E and 80% unsaturated fatty acids. This is very beneficial for the skin and hair.

This fruit, similar to a wrinkled olive, is a delight for goats. However, after eating the pulp, they usually spit out the seed or expel it intact with their feces if they swallow it. Once the peel is removed, this coveted oil can be extracted.

The collection of argan stones employs a multitude of Moroccan women’s cooperatives, who collect it to sell the oil. These same women even organize tourist visits to show the curious image of tree-climbing goats.

The boom that led to the incorporation of argan oil into cosmetics has triggered its demand, so that more and more herders and collectors increase their herds and the business continues to grow. This is why, in recent years, there has been pressure to control the breeding of domestic goats, since there are so many that the balance with the environment is starting to be lost.

Diarrhea in Small Ruminant Newborns
The diseases that cause constant diarrhea in small ruminant newborns are quite dangerous. Read all about it in this article. Read more »
Link copied!
Interesting Articles
Curiosities
4 Types of Communication Between Animals