Mental illnesses also affect the health of pets so it's important to know how to identify them in time. Here we'll show you some of the most common in cats. 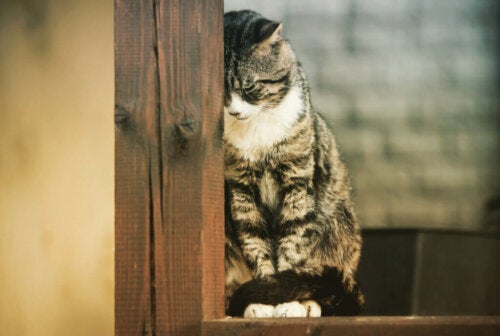 Behavioral disorders can be associated with mental illnesses. This is evident in humans, but animals can also develop pathologies that affect both their physical and mental states. For example, the most common mental illnesses in cats are stress, depression, and epilepsy.

All these issues have different origins and treatments. As a cat owner, if you suspect your cat has similar symptoms, it’s necessary to go to the vet or consult a feline behavioral specialist.

Next, we’ll talk about the three most common mental illnesses in cats.

Stress in cats can cause serious harm to their health, as it continuously affects the immune system and can lead to eating disorders, alopecia, and strange behavior.

A stressed cat can become aggressive and display compulsive and repetitive behavior. Other clear signs of stress are:

Some common causes of stress could be a change in their space or routine, the arrival of other animals in the home, or a lack of sufficient stimuli due to poor environmental enrichment.

To treat a stressed cat, you can consider making it easier for them to adapt to new changes with the help of pheromones.

You can also help to prevent this by properly introducing new family members or by enhancing their environment with new resting places, toys, scratching posts, or secure windows where they can look outside.

Stress may not fall under the category of mental illnesses in cats, but it’s certainly a major trigger for both physical and mental disorders.

Depression is a common feline illness and often goes unnoticed. Cats are very sensitive animals and any change can affect their life more than you’d think.

The symptoms of depression in felines can be camouflaged with the habits of a calm cat. However, you shouldn’t ignore them, as depression can really affect their health. Some signs of this illness are the following:

Lack of freedom, especially if a cat is used to leaving the house, spending more time alone, the loss of a family member (whether a person or another pet), the development of an illness, lack of stimuli, or a poor diet are some of the things that can trigger depression in cats.

You need to consult a vet if you think your cat might be depressed and never administer medication on your own. Often, stress and depression can be treated by paying special attention to the animal’s environment.

Epilepsy is a neurological disorder that produces transient seizure episodes. Seizures are not always synonymous with epilepsy, as they can appear due to endocrine, metabolic, or cardiovascular diseases, as well as acute pain.

However, epilepsy consists of seizures with an intracranial origin. Once the veterinarian confirms epilepsy, they will try to figure out what’s triggering the seizures, or, whether it’s idiopathic epilepsy, which has no known causes.

In cats, only between 15 and 25% of cases are idiopathic epilepsy. For this reason, any type of pathology that can product epilepsy with an organic cause is very important:

Idiopathic epilepsy usually occurs in cats between one and three years of age and the animals don’t usually show any abnormalities between seizures. As a result, it’s difficult to be able to show symptoms for a veterinary consultation, besides the seizures.

In addition, due to the sudden, exaggerated movements, owners of epileptic cats tend to be alert, but are not very objective describing what happens to their pets. The attacks are usually short and don’t last more than a minute. Then, once it ends, the animal seems to have completely recovered and may even quickly go to get something to eat.

If you’ve ever witnessed an epileptic seizure or your cat has had seizures, even once, you should go to the vet for a neurological examination for your pet.

While epilepsy can be treated with medication, it’s never cured. However, treatment reduces the frequency of seizures and provides a better quality of life for the animal.

As you’ve seen, cats can suffer from mental illnesses, in most cases triggered by stress. The symptoms in these cases are very similar and you should pay attention to them before the problem worsens.

Mental Health and Illness in Dogs: How to Treat Them
Things like mental health and illness are real for our dear pets. In the following article, we'll tel you how to treat some of them. Read more »
Link copied!
Interesting Articles
Mental Health
Mental Stimulation in Dogs: A Matter of Games