A number of factors can lead to this illness, ranging from the ingestion of certain foods to issues like early castration. Keep reading to discover more about adrenal disease in ferrets and the hormone disorders that it causes. 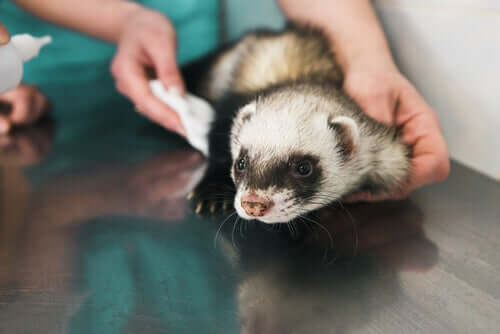 Ferrets are members of the Mustelidae family, which includes otters, weasels, and badgers, etc. But, unlike their cousins, they have been domesticated and are now considered exotic pets. Adrenal disease is quite a frequent illness among this species.

Unfortunately, the origin of this disease has to do with improper handling. Normally, it’s the result of hyperplasia of the tissue of the adrenal glands, although it can also be caused by lumps.

The causes of adrenal disease in ferrets

The early castration of ferrets is one of the factors that foster the development of this disease. Early castration leads to hormonal imbalances as a result of cutting off the production of sex hormones. And this, in turn, leads to an overstimulation of the tissue of the adrenal gland.

This illness has been seen to appear in ferrets from certain breeders, as its development also has to do with inbreeding. What’s more, the administration of certain foods can also cause adrenal disease, although it’s a difficult area to study.

Photoperiod problems also seem to have to do with adrenal disease in ferrets. This is because pet ferrets often spend too many hours in brightly lit rooms.

The early castration of ferrets is one of the factors that foster the development of this disease. Early castration leads to hormonal imbalances as a result of cutting off the production of sex hormones. And this, in turn, leads to an overstimulation of the tissue of the adrenal gland.

The symptoms of adrenal illness in ferrets

What usually happens in ferrets in most cases of this illness is the progressive hair loss on both sides of the body. This is often a sign of hormonal issues, fleas, or dermatitis, as these issues usually affect specific areas. This alopecia tends to begin on the sides and on the base of the tail.

Even if your ferret recovers from the hair loss, this doesn’t mean it’s in the clear. This is because ups and downs in hair growth are common as a result of hormonal spikes. Dry skin and itchiness may also appear, which can produce irritation and lesions.

Our ferrets may change their behavior and become more aggressive and standoffish. What’s more, males may become more sexually aroused. As for females, they develop symptoms similar to when they’re in heat, which can cause them to suffer from vaginal infections.

Photoperiod problems also seem to have to do with adrenal disease in ferrets. This is because pet ferrets often spend too many hours in brightly lit rooms.

Diagnosis and treatment of adrenal disease in ferrets

Your veterinarian will need to know your animal’s medical history, which will offer clues regarding the origin of the disease. However, the professional will also conduct diagnostic tests, including ultrasound and blood and hormone exams to confirm or rule out adrenal disease.

Treatment may involve pharmaceuticals or surgery, which consists of the extraction of the affected gland. If the disease is affecting both adrenal glands, then your pet will need to take greater doses of supplements with pharmaceuticals, given their importance.

The best prevention is to seek out the best veterinarian for your pet. In other words, a professional that specializes in exotic pets. He or she will be the one to recommend proper guidelines to keep your ferret from becoming ill. At the same time, you can follow the basic recommendations for caring for ferrets below:

The Best Environmental Enrichment for Your Pet Ferret
Environmental enrichment is very important for the well-being of a pet ferret. Learn about these hacks that'll make you ferret happy! Read more »
Link copied!
Interesting Articles
Illnesses and Treatment
6 Genetic Diseases in Cats