All About Feline Immunodeficiency Virus (FIV)

This disease weakens a cat's immune system and the symptoms aren't easy to spot. It's very common amongst stray cats, so it's important to try and prevent your cat from coming into contact with them. 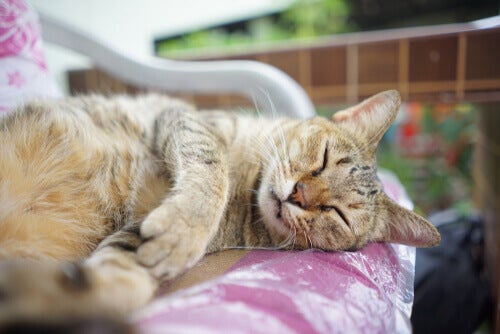 Experts also know Feline Immunodeficiency Virus (FIV) as feline AIDS and it’s a disease that weakens the immune system. A cat gets infected when the virus enters the bloodstream and this normally happens when they’re bitten by an infected cat.

It’s similar to feline leukemia, but leukemia is a retrovirus whilst FIV is a lentivirus, and, in medicine, there are big differences between the two.

Infection is common amongst male cats that go outside a lot, normally because they fight other male cats over females in heat. In fact, it’s almost impossible for house cats to get infected if they’ve been castrated. Females are also at risk of catching the virus, as well as their kittens when giving birth or breastfeeding.

Only between 1.5 and 3% of the cat population is infected, although the virus accounts for 15% of cat illnesses.

Because it’s a disease that attacks the immune system, it’s difficult to identify. It might be the case that the only symptom is that your cat is more susceptible to other illnesses.

As we’ve mentioned, the feline immunodeficiency virus makes a cat much more vulnerable to other illnesses that they wouldn’t suffer from if their immune system was healthy.

As a result, one symptom of this disease could be that your cat gets sick with an illness that they’ve already been treated for. Another symptom is if they frequently suffer from secondary infections, such as skin problems, gum problems, urinary infections, or respiratory infections. You might note that they’re losing a lot of fur, losing weight, or have a fever with no apparent justification.

What to do if your cat is infected

If you suspect that your cat has this infection, you should go straight to your vet for a proper diagnosis.

This illness causes a decrease in leukocytes and white blood cells, which are responsible for fighting infections. Anemia is also common.

This virus still has no vaccine. However, it’s also important to note that they can’t pass it on to humans.

There are two differing opinions among experts regarding how cats get infected. Some claim that it’s unusual and quite difficult to get infected, whilst others claim that cats can even catch it through saliva or other bodily fluids.

Although there’s currently no cure for this disease, it’s possible to keep the effects under control. So, the key is to try to keep your cat free from other illnesses, prevent them from infecting others, and otherwise try to maintain their quality of life. To do this, the following measures can be helpful:

As you can see, the Feline Immunodeficiency Virus doesn’t necessarily need to be a serious matter for your cat. They can still live a long life if you take care of them properly.

However, despite your best efforts, their health and well-being will still be significantly affected. If your cat is getting sick frequently, the kindest thing may well be to have them put to sleep peacefully.

Feline Infectious Peritonitis: It Could Be Fatal for Your Cat
Feline infectious peritonitis is particularly awful because it can be fatal to a cat. It's also hard to diagnose and there's no cure...Here's some more info Read more »
Link copied!
Interesting Articles
Illnesses and Treatment
Four Common Health Problems in Small Dog Breeds