Short-muzzled dogs are at risk to develop brachycephalic syndrome. Early detection and constant monitoring from a veterinarian are essential so that your furry pal can comfortably cope with this serious health problem. 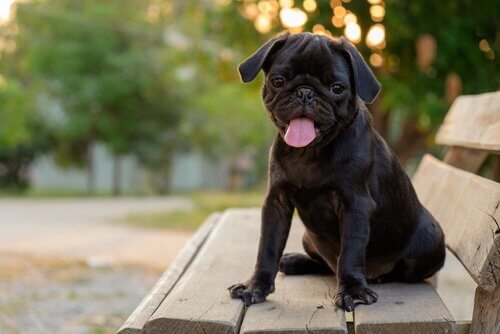 If you have a short-muzzled dog, you should know that he’s not exempt from developing brachycephalic syndrome symptoms. This is a pathological condition which is a consequence of certain anatomical anomalies that obstruct the upper respiratory tract. If discovered early, serious problems can be avoided. So, regular check-ups with your vet are important.

Some facts about brachycephalic syndrome

The particular anatomical anomalies of brachycephalic dogs often interfere with their normal breathing flow, as there’s less space for air to access their lungs. Also, because of this, less oxygen reaches the blood. This is due to their:

If you see any of these signs in your dog, take him to the vet so they can determine if they are brachycephalic syndrome symptoms:

Without treatment the dog will eventually suffer from:

Although not all short-muzzled dogs suffer from brachycephalic syndrome, some breeds are more prone to it. Here are some of them:

How to improve the life of a dog with brachycephalic syndrome

Both high temperatures and stress, or plain, simple excitement can make it difficult for your dog to breath. And it will worsen if the animal is overweight.

So, if your dog is suffering from brachycephalic syndrome symptoms, keep the following in mind:

In some cases, surgery will be needed for a dog with brachycephalic syndrome in order to improve its quality of life. Surgery may include widening the external nostrils, or snipping and snaring everted laryngeal saccules.

Widening the narrow holes of a dog’s snout is a simple procedure and it often improves the symptoms of this syndrome. This surgical intervention can be performed after the dog’s third or fourth month of age.

In the case of soft palate disorders, correcting the length will reduce the pressure of the structure of the pharynx and larynx during inhalation.

Don’t hesitate to consult with your veterinarian so they can recommend the best options for your four-legged friend in order for them to be healthier and happier.

How to Control Your Dog’s Barking
When a dog barks, it may be because he has heard something dangerous, is bored, hurt something or wants to attract attention. Some races are "noisier" than others, and in many cases this incessant sound can bother us. In this article, we will give you some tips so that you can control your dog’s barking. Read more »
Link copied!
Interesting Articles
Illnesses and Treatment
What Causes Brachycephaly in Dogs?