Golden Retrievers are much more likely to develop cancer than other dogs. Inbreeding and genetic isolation are some of the most likely causes. In this article, learn all about cancer in Golden Retrievers. 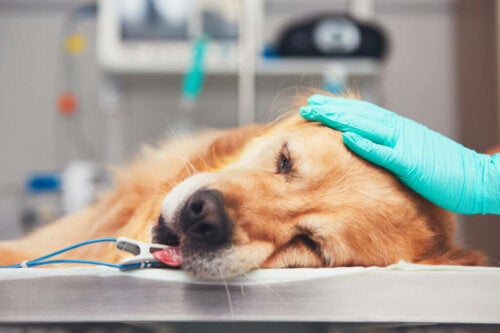 Cancer in Golden Retrievers is a health problem that equally concerns vets, researchers, and owners. It’s an increasingly prevalent disease in this breed. In fact, approximately 70% of dogs of this breed die from two types of neoplasia: hemangiosarcoma and lymphoma.

The average lifespan for a Golden Retriever is 9.5 years, in part due to the slow but lethal action of malignant tumors. What’s the cause of this worrisome data? If you want to know everything about cancer in Golden Retrievers, read on.

The causes of cancer in Golden Retrievers

Let’s start with the basics. The term “cancer” refers to a group of diseases caused by the abnormal growth of a group of cells. This is due to genetic mutations that disrupt normal cell cycles, causing them to divide uncontrollably and end up affecting other tissues.

When cells grow uncontrollably, dreaded malignant tumors appear. If these mutated cells enter the bloodstream or lymphatic stream and settle in other organs, metastasis occurs. This definition of cancer is universal, whether we’re talking about humans, elephants, or Golden Retrievers.

In the case of the breed we’re talking about here, the causative agents aren’t fully known. What’s clear is that it’s a genetic issue, since the prevalence of neoplasms in other dogs is 20%, while in Golden Retrievers it’s 60%.

Although no specific cause has been found, multiple studies have linked cancers in this breed to heredity. Chromosomal aberrations and gene changes such as VEGFR-1 seem to be linked to cancer in Golden Retrievers.

Types of cancer in Golden Retrievers

As we mentioned above, up to seven out of 10 dogs of this breed are at risk of suffering from cancer throughout their life. It tends to affect more males (66%) than females (57%), as is the case in humans.

The most common histological diagnosis in deceased dogs shows that two types of neoplasms are prevalent in most cases: hemangiosarcomas and lymphomas. We’ll tell you all about them below:

Approximately 23% of Golden Retrievers die from this neoplasm. It’s a very malignant tumor that sits in any vascular bed, that is, in the veins, arteries, and blood capillaries. Because these systems run throughout the animal’s body, tumors can occur almost anywhere.

It can be difficult to detect this type of cancer, unless it’s located in a superficial vessel. If this is the case, the dog will have a mass under its skin, which would facilitate the diagnosis. Internal tumors make the animal continuously lose blood. Thus, the most common symptoms are tiredness, fatigue, and pale gums.

After veterinary diagnosis, surgery and subsequent chemotherapy are the only possible treatment options. But the prognosis still isn’t positive. Only 10% of dogs live a year after being diagnosed and treated.

This is the cause of approximately 18% of deaths in Golden Retrievers. This type of cancer affects the lymphatic system and lymph nodes. It can manifest in a localized or general way. There are almost 30 types of canine lymphomas, which we’re not going to get into right now.

However, you simply need to know that the most common type of lymphoma in dogs is multicentric. It accounts for up to 85% of all cases and causes swelling of the animal’s lymph nodes.

Chemotherapy is the only way to fight this disease. The prognosis is highly variable.

What to do to prevent cancer in Golden Retrievers

Unfortunately, the owner can’t do anything. This burden falls on researchers and breeders alike, as these professionals are the only ones able to discover the genes that cause these serious diseases. Once this happens, mutation-bearing specimens must be isolated and prevented from reproducing.

This is the only way to clear the genetics of the breed of carcinogenic mutations. Unfortunately, there’s still a long way to go to accomplish that.