Greater awareness of the bug bites that can affect your dog will help you take better care of your four-legged friend. 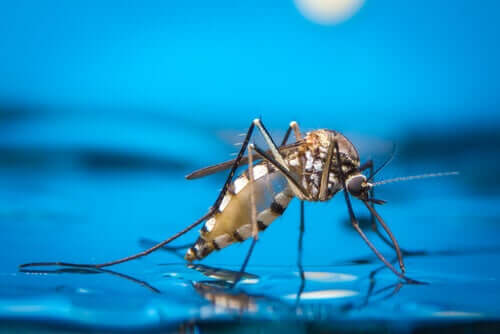 There are a number of different insects that can be harmful to your dog, including mosquitoes, fleas, bed bugs, and ticks, as well as bees and wasps. When a bug bites, it infuses its saliva with specific components that allow it to feed.

Their saliva contains a cocktail of different substances that have been carefully refined over millennia. These include anticoagulants and vasodilators, as well as some anesthetic substances. In addition to causing allergic reactions, they can also spread a number of diseases.

Some animals are particularly sensitive to certain bug bites, and may have a reaction. In severe cases, they may go into anaphylactic shock. This happens when the immune system has an extreme reaction to the bites.

While anaphylaxis in response to an insect bite is rare, it’s important to look out for any behavioral changes, shortness of breath, or swelling of the skin. If you notice any of these symptoms, you must seek veterinary attention as soon as possible.

Heartworm disease is a serious parasitic disease caused by Dirofilaria immitis worms, which live in the blood vessels and heart of infected animals. Unfortunately, there are no laboratory tests that can confirm a diagnosis of dirofilariasis.

The disease spreads through mosquito bites. When a mosquito bites an infected animal, the blood it extracts contains prelarvae. The parasites continue to develop inside the mosquito, until they reach the larval stage.

When the mosquito then goes on to bite a second dog, it infects it with the parasite. Once inside the dog, each heartworm can grow up to 12 inches in length, and can cause damage to the lungs, arteries and heart. While there are treatments available, mosquito prevention and control is the most effective method.

If your dog has been bitten by a tick, removing it as soon as possible will help reduce the risk of a tick-borne infection like Lyme disease. This disease is caused by Borrelia burdogferi bacteria.

Owners can prevent Lyme disease by protecting their pets against parasites. In the case of an infestation, it’s important to treat the dog as quickly as possible. The likelihood of an infection increases if the dog is in contact with the tick for more than 48 hours.

If left untreated, Lyme disease can cause problems with the joints and the nervous system.

Babesiosis is another disease caused by protozoan (unicellular) parasites, of the genus Babesia. Dogs normally become infected through tick bites.

It can also be spread via blood transfusions from an infected donor, or by congenital transmission. The incubation period is around two weeks on average, but the symptoms may be fairly mild. In some cases, it can be months or even years before you can diagnose the illness.

Flies like botflies and blowflies can also infect your dog with parasites such as myiasis. They deposit their eggs into their victims’ skin, normally targeting open sores. Within a matter of days, the eggs will hatch into larvae which crawl over the surface of the skin, or burrow down into deeper layers of tissue, causing secondary swelling and bacterial infections.

Depending on the area of the body, myiasis can be classified as cutaneous, ophthalmic, atrial, or urogenital. It can affect any vertebrate, including human beings, and is present all around the world. However, it’s most common during wet seasons.

A protozoan parasite causes this disease that infects dogs and certain rodents in many parts of the world. It’s most common in rural areas, particularly in South America and the Mediterranean. Sandfly bites normally spread this parasite.

Humans can also contract leishmaniasis. However, it’s important to remember that you can’t catch it directly from an infected dog.

Pets and Parasites: Understanding Single-Celled Parasites
Single-celled parasites are one of the biggest headaches for vets around the world. In this article, we'll show you some of the most common species. Read more »
Link copied!
Interesting Articles
Illnesses and Treatment
Mycotoxins and Animal Production