Genetic Disorders: Can Dogs Have Down Syndrome?

Down syndrome or trisomy 21 is a genetic disorder exclusive to human beings, and is caused by the presence of an extra copy of chromosome 21. 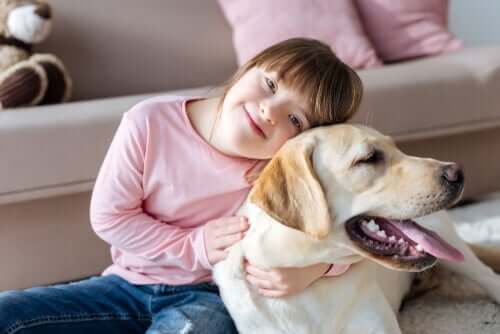 Down syndrome is a genetic disorder that causes a combination of physical and mental symptoms. While it’s commonly relatively common in humans, it’s very rare to see it in other species. And in case you’ve ever wondered: no, dogs can’t have Down syndrome.

While some dogs can display similar symptoms, the cause is very different. Humans and dogs share many genetic conditions, but Down syndrome isn’t one of them.

What is Down syndrome?

The term syndrome refers to a set of symptoms that are characteristic of one or several diseases. Down syndrome causes the following symptoms:

Down syndrome is caused by a chromosome abnormality. Humans have 46 chromosomes. Of those 46 chromosomes, half are provided by the sperm at the time of fertilization, while the other half comes from the egg.

People with Down syndrome have an extra chromosome in the nucleus of each of their cells – 47 instead of 46. More specifically, they have an extra copy of chromosome 21, which is why the condition is also known as trisomy 21.

Every species, animal or otherwise, has a specific number of chromosomes, which contain all of the body’s genetic information.

In other animals, such as dogs, chromosomes are divided up in exactly the same way – half from each parent. As such, it is possible for there to be an extra copy of one of the chromosomes. However, this doesn’t mean the animal has Down syndrome.

Can dogs have Down syndrome?

A similar syndrome has only been found in non-human primates, with whom we share 98% of our DNA. While this isn’t the case when it comes to dogs and cats, they can suffer from other genetic abnormalities that cause similar symptoms.

We’re sure you’ve probably read stories about Down syndrome in cats, tigers and dogs online… These stories are often accompanied by photos of animals that seem to have similar facial features to those found in people with Down syndrome. These traits may be caused by a deformity, illness, or a genetic mutation, but not Down syndrome.

The most similar condition found in animals occurs in a strain of laboratory mice. Researchers created the so-called trisomic mouse in order to study Down syndrome in an appropriate animal model.

By creating an extra copy of the mouse chromosome 16, investigators managed to create a trisomy of genes similar to those found in the human chromosome 21. In doing so, they hoped to be able to study how these genes were expressed, and how similar the resultant physical and mental traits were to those found in people with Down syndrome. They also wanted to study the interaction between the genes, and the development of possible gene therapy techniques.

While they can’t have Down syndrome per se, animals can suffer from cognitive disabilities other than trisomy 21. These can be caused by a number of different factors. For example, cognitive dysfunction syndrome, which is found in older dogs, is caused by old age. It’s also found in cats, although it’s far less obvious.

We share many other genetic diseases with dogs, some of which are the result of specific chromosome mutations, such as night-blindness, cataracts or even narcolepsy. This means that certain breeds could make good model organisms for studying these diseases in humans.

Genetic Disorders in Dogs
In this interesting article, learn all about the most common genetic disorders in dogs, such as hip hip dysplasia. Read on! Read more »
Link copied!
Interesting Articles
Illnesses and Treatment
6 Genetic Diseases in Cats