If you ever have to deal with a lame cat, it's a good idea to know the best way to help them. Some conditions require immediate medical attention. 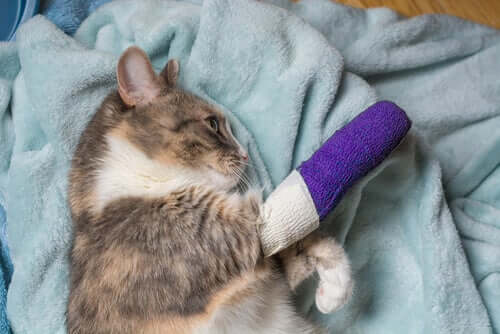 Lameness can be caused by a number of different medical conditions that affect the joints, muscles, bones, nerves, or even skin. However, some of the causes of lameness in cats are more serious than others. Find out more in this article.

Obviously, if your cat gets hit by a moving vehicle or falls from a window, it’s not uncommon for them to struggle to walk properly afterward. However, sometimes the cause of lameness in cats isn’t so obvious or dramatic.

This means that it can be a good idea to learn about possible causes and symptoms of lameness in cats so that you can help them as much as possible.

Lameness is not a disease per se, but it can be a sign of problems with the musculoskeletal or nervous system.

Lameness is a symptom

Any cat that can’t walk, run, or jump normally can be considered to be lame. But there might also be cases of lameness where the cat is in obvious pain or even where one of their limbs looks abnormal.

It’s important to remember that lameness is actually a sign of some other medical condition and is not a condition in itself. There are many different conditions that can cause lameness in cats and each of these can have many symptoms, of which lameness is just one.

As a result, it’s important to pay attention to other signs, such as a loss of appetite, making more noise than usual, lethargy, vomiting, weight loss, drinking more water than usual, or urinating more than usual.

Lameness in cats is normally caused by an injury or disease which affects the musculoskeletal or nervous system. In fact, any change to a cat’s bones, muscles, tendons, ligaments or nerves can cause lameness.

Lameness can also be the result of other systemic diseases, such as conditions that affect the immune system, infectious diseases, poor nutrition, cancer, or diabetes.

Below is a list of the most common causes of lameness in cats:

Lameness in cats and diagnosis

It’s important to point out the importance of getting a proper diagnosis so that your cat doesn’t end up with permanent muscular or nervous disorders. Your vet will carry out a complete examination of your cat to try to determine the precise cause of the problem.

Your cat’s age, injury history, whether the problem is acute or chronic, the severity of their lameness, and how many legs are involved are all factors that can help point to the source of the problem.

The diagnosis may require some special tests which often involve one or more of the following:

Treatment for lameness in cats

As well as treating the root cause of the lameness, the vet will also want to control any pain that your cat might be suffering. They’ll normally start with a less invasive treatment and then move on to other treatments if that doesn’t work.

The first option is medication, such as non-steroidal anti-inflammatory drugs (NSAIDs) to reduce the inflammation in joints or ligaments.

Throughout the course of this treatment, your vet will monitor your cat closely to make sure that they don’t suffer kidney, liver or gastrointestinal damage. The vet is also likely to prescribe plenty of rest in a cage.

If NSAIDs don’t work, the vet will likely prescribe some opioid analgesics such as tramadol, buprenorphine, or butorphanol. These drugs are normally reserved for more severe pain.

In cases of osteoarthritis, it may be useful for your cat to be given some medication to protect the cartilage surrounding the joint in question. These are normally used to slow the degradation of the cartilage.

There are also a variety of other treatments that can help control pain, such as chiropractic treatments, acupuncture, physiotherapy, laser therapy, massages, and a change of diet.

But, aside from all these treatments, if your cat has a genetic condition which limits the use of their limbs or causes them a lot of pain, your vet may propose surgery.

Ultimately, your vet will be able to prescribe the most appropriate treatment for your cat. But it’s important for you to follow all their instructions carefully and to the letter to give your cat the best quality of life possible.

Hip Dysplasia in Cats: Everything You Need to Know
It may be rare, but it's important to know the symptoms of hip dysplasia in cats. That way you'll know if it's worth a visit to the vet, or a passing issue. Read more »
Link copied!
Interesting Articles
Illnesses and Treatment
Spina Bifida in Cats