Senile Dementia in Dogs: What Does Science Say?

Science has discovered similarities between Alzheimer's and dementia in dogs. This is a big step forward in understanding what causes the disease and even how we might treat it. 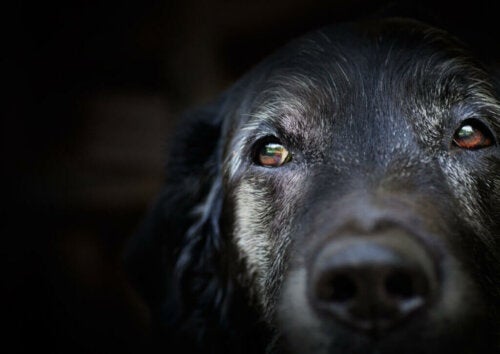 Veterinary medicine that’s focused on older animals is advancing quickly owing to the increasing number of pets that are reaching old age as a result of better care from their owners. Unfortunately, whilst they’re living longer, this also means an increase in age-related illnesses. One of these is senile dementia in dogs.

This disease is comparable to dementia in humans (a good example is Alzheimer’s disease), although there are other related neurodegenerative conditions.

The scientist W.W. Ruehl, along with his collaborators, coined the term “Cognitive dysfunction syndrome” to explain the way that older dogs’ brains degenerate and lead to changes in behavior.

What changes happen to the brain during senile dementia in dogs?

Cognitive dysfunction syndrome, or senile dementia, is a neurodegenerative disorder commonly found in older dogs. This doesn’t mean that all old dogs will suffer from it, but simply that it only really tends to be observed in older dogs.

Just as happens with humans, a dog’s brain changes as they get older. These are normal changes. And, although they can cause certain changes in behavior or personality, they’re not symptomatic of an illness. These include:

Many of these changes can also appear if a dog is suffering from senile dementia. However, one of the most important factors discovered so far, and that also appears in cases of Alzheimer’s in humans, is the presence of deposits of a protein called Amyloid Beta.

Build up of Amyloid Beta during senile dementia in dogs

The protein Amyloid Beta builds up in the spaces between the neurons in different parts of the brain, like the parenchyma tissue and the blood vessels. This build-up is called neuritic, senile, or amyloid plaque.

Although we don’t know exactly how these protein deposits act, we do know that Amyloid Beta has neurotoxic properties. This compound compromises neuron function, causing damage to the synapses, killing neurons, and causing a reduction in neurotransmitters.

According to studies, there’s a correlation between the size of these plaques and the severity of senile dementia. This fact is very similar to what happens with Alzheimer’s in humans.

Genetics and senile dementia in dogs

Some breeds of dogs seem to be more predisposed to this condition than others. This is due to the mutation of various chromosomes which then causes an overproduction of amyloid beta.

Research suggests that, although smaller breeds of dogs live longer, they don’t have as high a risk of developing senile dementia as larger dogs. Similarly, some scientists have seen that females are more at risk than males.

Castrated dogs also seem to be more prone to this condition than those that haven’t been neutered.

Treatment for cognitive dysfunction in dogs

Many of the symptoms of senile dementia in dogs can cause their relationship with their owner to deteriorate. This can even reach the point where the owner decides to put them to sleep, or worse, simply abandon them. Since the condition has no effective treatment or cure, this can happen as soon as they receive a diagnosis.

Often, the available treatments seek to try and reduce the levels of anxiety that the dog suffers from. Normally, in a very short space of time, the dog will stop understanding the world around them and this will make them very stressed. This leads to unpleasant changes in behavior for the owners, including aggression or excessive barking.

Unfortunately, just like with Alzheimer’s, senile dementia in dogs has no cure. And since the dog has absolutely no idea what’s going on, it’s simply a question of trying to manage their deterioration in the kindest and most empathetic way possible.

Urinary Incontinence in Dogs
If your dog can't "hold it in," it might have a bladder problem. It's important to learn about urinary incontinence in dogs to spot the symptoms early. Read more »
Link copied!
Interesting Articles
Illnesses and Treatment
What Are the Symptoms of Fever in Dogs?