Discover the Signs of Senility in Dogs

Once dogs reach the age of 8, we can consider them to be "elderly". This state, although natural, can produce diverse pathologies in the animal. With that in mind, we want to tell you about the signs of senility in dogs. 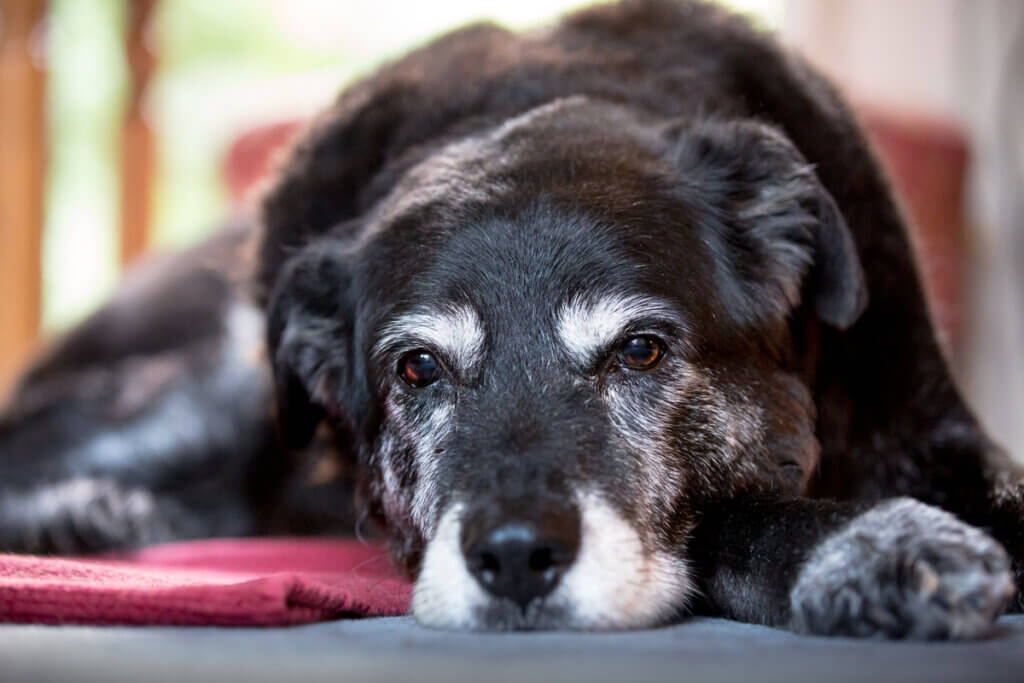 As the pet gets older, it’s normal to observe certain changes. Although it’s not easy to accept, old age is a process that reflects the passage of time and must be accepted. For this reason, you should be able to identify some symptoms and typical signs of senility in dogs. And, in this way, you’ll be able to face them and make this stage easier for the animal. Here are some of the symptoms.

Old age brings with it a series of physiological and psychological changes. This cognitive deterioration of organic functions is called senility. Normally, it’s a concept that we may confuse with dementia. However, these are two different things, as dementia entails the loss or disturbance of mental faculties.

Likewise, the above pathology has to do with numerous symptoms involved with mental deterioration. Therefore, mental decline isn’t a normal consequence of aging.

Senility leads to a loss of cognitive and physiological functions in dogs and cats. Cognitive dysfunction manifests itself through signs such as the following.

Aging causes dogs to reduce their activity levels by decreasing its energy. For this reason, as they age, dogs become more sedentary.

They also suffer a diminution of muscular force and tone, mainly in their extremities. Thus, their ability to move decreases. In addition, they can develop degenerative joint diseases, the most well-known of which is arthritis.

Loss of control of basic behaviors

Among the most characteristic symptoms of senility is loss of control. For example, pets can lose control over their own urinary system.

Another striking behavior is that their sense of smell, vision, and hearing also diminishes. As you can see, the above-mentioned ailments are clear signs of physical deterioration.

Senior dogs can undergo changes in their character as well, making them more irritable. What’s more, they may display less curiosity regarding new objects.

Decreased interaction with other individuals

Senility is also associated with changes in social behavior as well. This implies a decrease in interaction with people having to deal with disorientation and memory loss. In addition, they may have difficulties recognizing familiar places or people.

Apart from the signs mentioned above, they can suffer from others such as:

What can you do to make your pet comfortable?

Unfortunately, there’s nothing we can do to stop old age. However, you can consider a series of tips for your pet to facilitate this transition.

As we already mentioned, one of the main signs of senility in dogs is muscle weakness and sedentary lifestyle. This causes exhaustion in dogs and leads to joint disease.

One way to reduce these problems is to perform regular gentle exercise. This way, your dog will be able to maintain the routine of walking and to distract itself of the discomfort.

Changes in your pet’s diet

Other distinctive signs of senility in dogs are loss of smell, vision, hearing, and even taste. In addition, they may also suffer from tooth loss or other oral problems such as infections.

This makes it very difficult for them to eat hard foods such as kibble. By providing new foods or eliminating those that are difficult to ingest, you stimulate the animal.

In addition, an old dog requires a greater intake of vitamins and minerals. For that reason, it’s helpful to make changes in diet, whenever your veterinarian advises it.

Medications to alleviate the symptoms

Even if you follow the advice above, it may not be enough. Occasionally, veterinarians may recommend medication.

The function of these medications is to alleviate the symptoms derived from these degenerative processes. Normally, the veterinarian can prescribe analgesics or chondroprotectors.

Therefore, only your dog’s healthcare professional will know which medications are appropriate. Each dog has particular circumstances, so you should never give medication without medical supervision.

We can conclude that the signs of senility are typical of the passage of time, particularly in old age. It’s important to know how to distinguish these symptoms, since some can be confusing.

However, whenever you observe some strange behavior or conduct, you should go to a veterinarian. This information is merely informative and only a professional can determine the steps to be taken in each particular case.