Treatments for Pulmonary Edema in Dogs

Pulmonary edema in dogs is a serious condition that can cause the death of an animal in a matter of hours. This is why it requires urgent treatment. 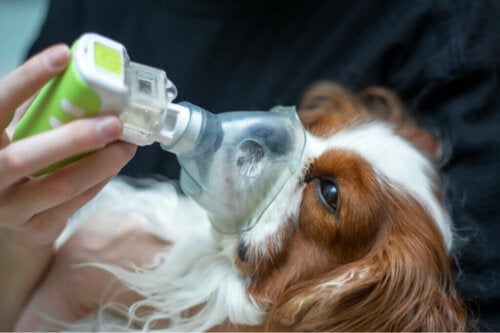 Pulmonary edema in dogs is an atypical accumulation of fluid in the tissue of their lungs, lower airways, or alveoli. This critical situation usually manifests with symptoms such as allergies and infectious processes.

A vet must make the differential diagnosis of this disease through a physical and radiological examination. Is your dog coughing excessively or short of breath? Take them to a clinic ASAP as this is a critical condition and every second is important.

As previously mentioned, the lung tissues of an animal with this condition fill with fluid, which prevents proper oxygenation of the organs and interrupts the normal respiratory process. There are two types of edema and we’ll dissect them in the following lines.

As the name suggests, this type of edema is due to heart failure. In this case, the presence of fluid in the lungs is the result of a change in hydrostatic pressure in the capillaries supplying the alveoli. This causes extravasation of blood fluid into the interstitium and alveoli — the spaces that are usually full of air.

Most of the cardiac problems that trigger this event are acquired ones, such as mitral valve degeneration and dilated heart disease. Age is an important factor in the appearance of these diseases. This is because the heart, like all tissues, wears out from so much beating as the years go by.

This is more complex to define, as it isn’t associated with cardiac dysfunction. Respiratory distress syndrome (ARDS) is one of the most common triggers. In fact, it causes lung tissue injury and internal fluid imbalance.

Infections such as leptospirosis, neurological problems, upper airway obstruction, and many other events can lead to noncardiogenic edema. The effect is more or less the same: the dog runs out of air, as the lung alveoli contain substances that shouldn’t be there.

Treatments of pulmonary edema in dogs

These depend on its severity and whether the condition is cardiogenic or not. Before anything else, you must treat a previous cardiac cause with medication or surgery. This is because it can cause many more systemic failures that would end an animal’s life. In any case, it all starts with stabilization.

A dog will require urgent oxygen supplementations as soon as they arrive at the vet’s clinic. It must be gentle and thorough, just as in the case of a human patient with respiratory failure. Any additional stressor can make the animal’s breathing even worse, further endangering its life.

The mask or nasal cannulae will supplement oxygen to the sick dog, so the compromised organs will stabilize over time if all goes well. The veterinarian will probably also place a central venous access catheter, in order to have a fast passageway into the animal’s bloodstream.

Noncardiogenic pulmonary edema is usually self-limiting and resolves within 48-72 hours with appropriate treatment. Furthermore, gaseous supplementation must go on during this period, with an inspired oxygen fraction of 40-70%. Intravenous fluid therapy may also be necessary, as affected dogs are often too weak to eat and drink.

In any case, few medications are effective in the treatment of pulmonary edema in dogs. Furosemide – a diuretic used for congestive heart failure – can serve as a bronchodilator. It would make it easier for the dog to breathe, at least slightly. It’s for this reason that doctors use it in specific cases.

The β2-adrenergic agonists may also be useful on certain occasions. Some believe these can reduce bronchospasm and increase the drainage of lung fluid. However, these drugs can also cause serious side effects, so only a professional should administer them to a sick dog.

As you may have realized, pulmonary edema in dogs is a complex clinical entity that only a professional can address. Thus, if your dog is having difficulty breathing and coughing excessively, then take them to the vet immediately. They’ll die in a matter of hours without proper treatment.

Diseases that Produce Breathing Difficulties in Dogs
The origin of breathing difficulties and problems in dogs is quite varied, making it difficult to avoid complications. Read more »
Link copied!
Interesting Articles
Illnesses and Treatment
6 Genetic Diseases in Cats