Among the numerous illnesses that veterinarians tend to encounter in pigs, multifactorial illnesses are the hardest to diagnose. And such is the case with porcine respiratory disease complex. 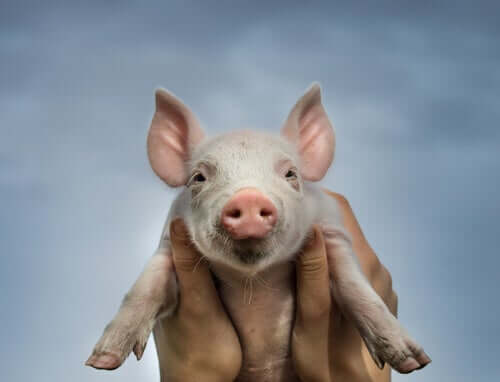 Since the 2oth century, many infectious illnesses are no longer produced by one single microorganism. Rather, they are multifactorial complexes. Among the pig species, one of the most significant polymicrobial illnesses is porcine respiratory disease complex–or PRDC–which includes the following:

A series of factors exist that favor this type of illnesses, such as:

What is the porcine respiratory disease complex?

This illness one of the most complex clinical situations that has the greatest negative impact on the production of pork livestock.

You may also want to read: Bird Flu: The Impact on Poultry Farming

This complex is a very frequent pathology in situations of intensive pork farms. However, it also occurs to a lesser degree in extensive farms. It produces a substantial economic loss, given the delay it causes in the fattening of these animals and the frequent need for euthanization.

Within PRDC, certain primary pathogens exist, which are capable of altering defense mechanisms and establishing themselves in the swine host. If they’re the only pathogens involved in the illness, then it usually goes away in a short time.

The problem is in the complications that develop in the presence of secondary or opportunistic pathogens. This generates a much more significant economic loss.

The rest of the pathogens are considered “opportunistic” because they take advantage of the harshness of the primary pathogen to also trigger an illness. Depending on the interactions and the complexity of the process, some microorganisms behave as “primary” agents or as “opportunistic” agents. But others are unequivocally linked to one of the two categories.

During the last 30 years, substantial changes have occurred in the pork industry. The production of pork has gone from extensive farming to the proliferation of intensive operations where animals live in overcrowded conditions. And this overcrowding is favorable to respiratory illnesses.

Factors that favor the appearance of the illness

First of all, overpopulation along with insufficient ventilation turns into a powerful ally of stress. On top of this, in second place, are the elevated levels of dust and ammonia. These produce a negative impact on the respiratory apparatus of pigs.

And, in third place, are other negative factors like the constant flow of animals, with the constant coming and going of individuals. This aggravates the spread of illnesses. What’s more, the majority of respiratory pathogens can be found everywhere. Therefore, it’s almost impossible to find a pig farm that’s completely free of them.

Even when sanitary conditions are taken to the greatest extreme, there are critical moments for the appearance of the complex. For example, when maternal immunity decreases, after weaning, piglets are more prone to catching illnesses. At the same time, these illnesses can enter a farm through vectors (or carriers), new animals, wild animals, etc. It can even spread through a farm’s own operators.

In conclusion, the multifactorial etiology of PRDC can vary not just from country to country, but also from one production system to the next. In fact, it can even vary within the same pig farm over time. Therefore, studies on the subject are highly complex but extremely necessary.

5 Things You Should Know About Canine Coronavirus
2019-nCoV is dominating headlines around the world. Today we'll talk about canine coronavirus and how it relates to the current pandemic. Read more »
Link copied!
Interesting Articles
Illnesses and Treatment
Treatments for Pulmonary Edema in Dogs