Veterinarians play a fundamental role in detecting cases of animal abuse as they regularly receive animals that have suffered at the hands of their owners. They're even able to identify it through the behavior of both the animal and the owner. 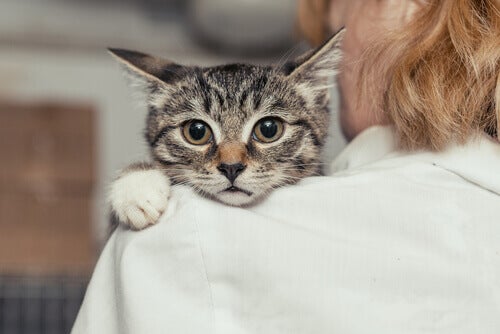 Veterinarians choose their career because they love animals. They want to dedicate their lives to protecting and caring for them. So, how can vets help fight animal abuse?

Unfortunately, animal abuse is still very common. And although you might think that this is just a problem for the animals, it has also been demonstrated that animal abuse is closely linked to abusing people.

Once someone vents their frustrations on an animal the first time, the second time is much easier. Then, over time, they gradually move on to abusing people. Therefore, the fight against animal abuse is a matter for everyone, even if some people are in a better position to help than others, such as vets, for example.

The role of vets in the fight against animal abuse

All over the world, many people are regularly accused of animal abuse. And when an animal is abused, they’re likely to end up at the vet. They’re also likely to arrive at the clinic in a poor condition.

This is where the vet will play an important role. They’re the only person who’s able to assess the animal’s physical and psychological state. This will help ensure that the abuser pays for their actions.

It’s also possible that an owner will bring their animal to the vet themselves, despite being the abuser. In this situation, the vet will still be able to observe any unusual or harmful behavior. Their judgment will still be very important in identifying any signs of abuse.

They’ll be able to see immediately how the owner treats their animal and how the animal reacts to them. If an animal has simply suffered an accident and the owner is a regular customer, then this will be clear. But if an unknown customer suddenly arrives with an animal who is injured and scared of their owner, this is a whole different story. But what should the vet do in this situation?

Stay with the animal

If it’s not possible to get the details of the suspected abuser, the vet may decide that the dog needs to stay with them to give them time to report the crime. To avoid suspicion, they may tell the owner that they need to keep them in for observation.

During this time, the vet will be able to make a closer examination to determine whether the animal has indeed been abused. This may involve psychological tests. If they believe that the animal really has been abused, they will report the case to the police, who will take over in the matter.

As long as the case is straightforward, the owner will be charged with animal abuse. Recently, around the world, the penalties for animal abuse have been increasing and can include prison sentences.

Seek adoption for the animal

Once the case has been resolved, the vet may then also play a role in finding a new home for the animal. It’s also possible that the clinic will be a temporary home during any legal proceedings.

But you can also do your bit by reporting any signs of animal abuse, whether the animal is a pet or a stray. All of us can help to make animal abuse a thing of the past.

Helping An Abused Dog to Trust Again
When wanting to help a street dog or an abused dog, we may realize that he acts differently to other dogs. Find out why in this article. Read more »
Link copied!
Interesting Articles
Animal Protection
The Sami: The Last Reindeer Herders