This accessory was invented by an IT technician in Los Angeles in 2006 to prevent strays from getting hit by cars at night. 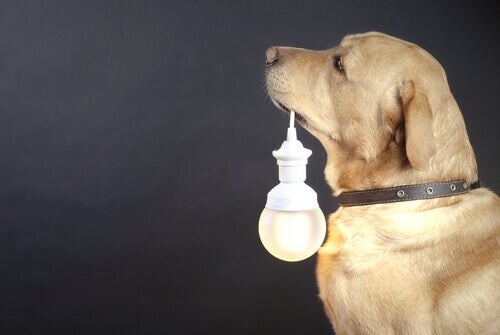 One of the most recent dog accessories to appear are luminous collars for stray dogs. The aim of these is to stop them from getting hit by cars. But they can also be useful for making sure that your dog doesn’t get lost in the dark.

What are luminous collars?

The collar consists of two basic parts. Firstly, there is a normal harness that fits around the dog’s neck, just like a normal collar. Then, there is a luminous object, usually an LED, located on either side of the collar.

The idea behind these collars is to help spot the dog more easily at night. This way, there is less of a risk in letting them off the leash in the park in the dark.

However, the main purpose is to prevent accidents with cars. This luminous collar allows drivers to more easily see the dog and avoid them if they run into the road.

The light can be easily changed just like any other accessory, and there is a range of varieties available. You can get ones that emit a constant light or ones that blink, depending on your preference.

It’s a step forward from the light-up jackets that already exist. Instead of a full item of clothing, the dog just has to wear a strap around their neck, which is much more comfortable.

Another more simple variant is a collar made simply out of a reflective material, which is cheaper and doesn’t require batteries. This was originally invented in 2006 by Jackie Simoni, an IT technician from Los Angeles.

Jackie made 15 prototypes before managing to take the collar to market, and the final design consisted of a simple collar with a light attached where the identity tag goes.

Inspired by this initial idea, many animal shelters started projects to save the lives of stray dogs, but focusing on avoiding car accidents at night.

One exceptional example of this is in India, where various organizations that are worried about animal welfare have chosen to put these collars on strays.

In the city of Bengaluru, the Sarvodaya Center for Animal Control has chosen to sterilize and attach these collars to some 8,400 stray dogs in the city.

The ‘Circle of Life’ campaign has teamed up with the app Unikorn, which tracks animals via GPS on their collar. It’s a very noble project and certainly not unusual for a culture that worships animals as gods.

So far, the project has expanded to the cities of Pune, Jamshedpur, Chennai, and Ondore, but Bengaluru is still the city with most of these collars.

The luminous collars used in India consist of a shiny strip that is double-stitched to prevent it from breaking or falling off over time.

Today, in the city of Pune, there are 80,000 stray dogs. And the project has a long way to go, as they’ve only attached some 300 collars so far.

And they’re not just useful for dogs

An extension of this idea is to attach them to other animals. They’ve also started attaching them to cows in the area. In India, it’s very common to see cows walking the streets. This obviously puts them at risk of a traffic accident.

Little by little, the idea has been spreading around the whole country. Sadly, we don’t have figures to verify the project’s success. But the organizations involved have noticed a significant reduction in accidents in the streets and on the motorways.

This is a great idea to improve the quality of life for animals. Let’s hope that it continues to spread around the world and continues to save the lives of both animals and people!

An Iranian Solider Lost a Leg to Save a Dog
Mohammad says that he loves animals. And he turned his words into action when he saved the life of a dog trapped in a barbed wire fence next to a minefield. His actions cost him to lose his leg, but he does not regret doing it to save a dog. Find out more in this article.  Read more »
Link copied!
Interesting Articles
Animal Protection
The Sami: The Last Reindeer Herders