Discover this New Species of Orangutan

In 2017, scientists identified a new species of orangutan, which was named the Tapanuli orangutan. In this article, we'll tell you more about this great ape. 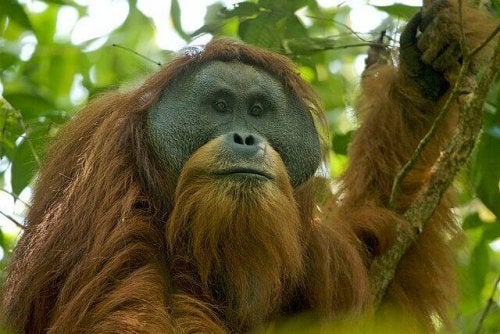 While it might seem hard to believe, humans are still discovering new species of animals today. In fact, three years ago, experts discovered a new species of orangutan.

Scientists discover new animals almost every year. In most cases, however, these are smaller species, and the majority of them are insects.

The Tapanuli, a new species of orangutan

This new species of orangutan was found in Sumatra, and named the Tapanuli orangutan (Pongo tapanuliensis). Experts estimate that the population is as little as 800 individuals, meaning they’re at risk of extinction.

Up until this discovery, the orangutan family was thought to be made up of two species: the Sumatran orangutan, and the Bornean Orangutan, which also has a number of subspecies.

However, it wasn’t until they carried out genetic analysis on 37 wild orangutans that they were able to prove that this population had been isolated from the rest of Sumatra for at least 10000 years.

The main threat to orangutans is deforestation. Since the 1950s, Indonesia has lost an area of rain forest the size of the UK and Spain combined.

The main reason for this deforestation is to make way for oil palm plantations. Entire forests have been destroyed to produce palm oil, a product that’s in huge demand.

It wasn’t until genetic analysis was carried out on 37 wild orangutans that they were able to prove that this population had been isolated from the rest of Sumatra for at least 10000 years.

Palm oil is a vegetable oil present in hundreds of products, including cocoa cream, pastries, and chocolates.

It’s estimated that the majority of palm oil production is carried out by cutting down hugely biodiverse areas of rainforest. In fact, the industry is responsible for the disappearance of the equivalent of 200 acres of forestland every hour.

In order to plant these palm trees, those responsible have to burn the forest first. Every year, people are going to even greater lengths to meet the rising demand for palm oil. Back in 2015, loggers burned almost 5000000 acres of forest.

This doesn’t just affect the orangutans, but also other species, like the Asian elephant and the Sumatran tiger, which also live in these rain forests.

Are we too late?

The orangutan is one of the most intelligent species in the animal kingdom. Like chimpanzees, they’re able to learn to communicate through sign language, understand concepts such as death, and can create and use new tools.

The most famous orangutan was Chantek, who lived at the Yerkes National Primate Research Center in Atlanta. He was able to understand spoken English, and communicate fluently in sign language.

This new species increases the great richness and biodiversity of the wildlife in southeast Asia, but it also highlights the impact of mankind’s actions and unsustainable consumption habits. The question is: are we too late to save the Tapanuli orangutan?

Unfortunately, experts have indicated that this species is particularly vulnerable. As such, we need to increase efforts to conserve their habitat.

How is it possible that we’re discovering new species mere decades before they’re set to disappear? If we don’t act now, the Tapanuli orangutan will be extinct before the year 2050.

This new species of orangutan increases the great richness and biodiversity of the wildlife in southeast Asia, but it also highlights the impact of mankind’s actions and unsustainable consumption habits. The question is: are we too late to save the Tapanuli orangutan?

Mountain Gorilla, a Unique Primate
There are some animals that have a history and relationship with humans that is unique. These stories call to us and the mountain gorilla is one of them. Read more »
Link copied!
Interesting Articles
Latest News
Cyclops: The One-Eyed Dog With 2 Tongues