Cats in Cinema: A Tour Through History

There are many movies where cats are key characters. We’re sure you’ve heard of Pinocchio, Cinderella, The Aristocats, Lady and the Tramp, Shrek, Garfield, the Godfather and Alice in Wonderland... 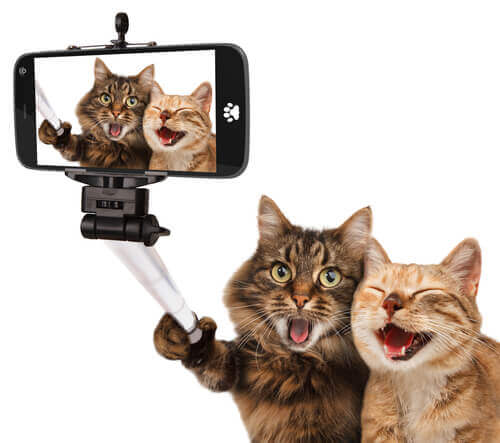 The most symbolic movies star humans, but cats in movies have also made history. Today, we invite you to take a historical tour of cats in cinema.

A history of cats in cinema

1901 – The Sick Kitten and the first cat in cinema

The Sick Kitten was a short film that marks the first time cats appeared on the big screen. The story is about two young children that look after a sick cat.

Smart and fast, Figaro became immortalized as the pet of Geppetto, in the animated film Pinocchio. The wooden doll whose nose grew by lying is faithfully accompanied by Figaro in his adventures. Figaro is also present in other Disney productions, though more discreetly.

Lucifer isn’t exactly a kind feline and doesn’t have a lot of love to give, hence his name.  He likes Cinderella’s evil stepmom’s wickedness and pursues the small and adorable mice Luke, Gus, and Jaq.

1951 – Alice in Wonderland and the Cheshire cat

It’s hard to forget the Cheshire cat’s peculiar ways of entertaining Alice with philosophical propositions. A colorful feline whose magical ability is to appear and disappear leaving behind his broad smile.

This classic animated movie tells the story of canine love between a gorgeous Cocker Spaniel and a mongrel. It’s a good romantic adventure where the lovers have to outwit the villains trying to separate them. In this movie, Aunt Sara’s Siamese cats are the antagonists.

A cat appears in one of the most unforgettable scenes of this Italian classic. The white cat hurts Marcello Mastroianni’s character as he walks with Anita Ekberg’s exuberant character. Instead of punishing the little kitten, the beautiful lady asks her partner to look for milk to feed him.

1961 – Breakfast at Tiffany’s and the award-winning cat

Breakfast at Tiffany’s is the kind of movie where everything seems to be symbolic. And we don’t say that just because of the brilliant Audrey Hepburn, one of the most beautiful and talented actresses in cinema. We also say it because of her unforgettable pet, which appears even in the final scene with that passionate kiss.

Rumor has it that at least nine cats were used during the filming of Breakfast at Tiffany’s. But it was the beautiful Orangey who got credit for the character, winning the Patsy Award, a type of Oscar for animal actors.

1972 – The Godfather and his faithful feline

Don Corleone’s beautiful gray cat appears in the first scene of this unforgettable film classic. The legendary Vito Corleone rests his pet on his desk, and it stars in many scenes.

Another movie classic that has a cat as a symbolic character. In principle, Jones should frighten the mice on board the Nostromo. But anyone that’s seen the movie knows that this cat has much more important work to do with Lieutenant Ripley.

This animated movie tells the tale of Oliver, a charming cat, whose fate leads him to join a gang of thieves. However, his life changes drastically when a lovely rich girl adopts him, and she is kidnapped. It’s then that the brave Oliver shows that he has the soul of a hero.

How can we resist his tender look? Shrek taught us that ogres can be kind, and that cats can be seductive in cinema. Puss in Boots, played by Antonio Banderas, is the most famous feline today.

How can we forget the famous lasagna lover? Garfield is undoubtedly one of the most famous cats in history. His film premiered in 2004, but Garfield has fans from his appearances on TV and magazines.

Catwoman is one of the most fascinating villains in the superhero universe. Highlighted by Michelle Pfeiffer’s excellent interpretation in 1992. Although there’s cruelty surrounding her transformation, the cats are a constant companion for Selina.