Meet Cassidy, The Kitten Who Walked Again Thanks to New Technologies

In this article, learn all about Cassidy, the kitten, who was able to walk again due to new technologies. Read on to be amazed! 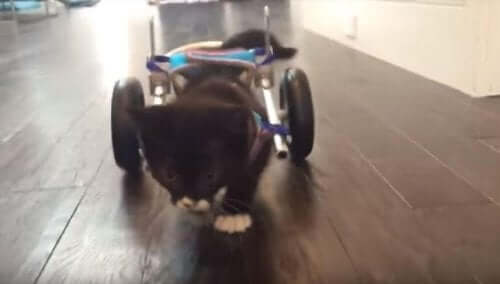 Who could have known that a beautiful forest in Langley would be the scene of an amazing story of perseverance and survival! This time, the star of the story isn’t a human but a small cat with an enormous will to live. His name is Cassidy and his story has touched millions of people. New technologies have worked miracles on him.

Cassidy, the kitten was born in a forest located in British Columbia, west of one of the coldest countries in the entire world: Canada. It’s believed that this cat was born like the rest of the homeless cats of the area. But due to a severe infection, he lost his two hind legs.

The chances that a feline kitten would survive without its two hind legs in a cold forest were practically zero. But Cassidy, the kitten exceeded all expectations and managed to survive for nine weeks until he was rescued by a human.

This was just the beginning of a beautiful story that has touched animal lovers and social media users alike.

The fact that this kitten was missing its two hind legs prevented it from hunting vermin for nourishment.

Cassidy was an easy target and didn’t have the slightest chance of hiding, running away, or trying to defend himself.

Numerous animals are killed by hunting dogs, despite having four legs and the necessary experience to know what to do to escape. Fortunately, Cassidy, the kitten never had an unfortunate encounter. And if he did, he managed to protect himself.

The really amazing thing is that when Cassidy was found, he couldn’t even move. Although he was close to death and malnourished, he managed to survive.

As soon as the charity TinyKittens Society heard the news, they decided to care for the stray pussycat. This Canadian charity rescues homeless cats. They have a shelter and also neuter cats to prevent overpopulation of the species.

When the rescued kitten arrived at TinyKittens, he barely weighed a pound and was in very poor health.

Thus, Shelly Roche, founder of TinyKittens, had the bright idea to ask for help through social networks. Her request was quite unusual: to help build a device that would enable this small feline to move like any other cat.

Shelly asked for help through Facebook to make a sling or a wheelchair for the small cat. The response also came from the least expected place.

Isaiah Walker and Josh Messmer responded to Shelly’s beckoning. They aren’t scientists or activists but two 17-year-olds who were in the 12th grade of a British Columbia high school.

They contacted Shelly and began working on a suitable design to solve little Cassidy’s mobility problem. With the help of a computer, new technologies, a 3D printer, and ingenuity, they built a prototype with wheels that would be perfect for Cassidy.

After making some adjustments, they completed the device. Now they only needed to train the lucky cat to walk on his own. Although it wasn’t easy at first, with practice and a lot of exercise, Cassidy managed to strengthen his forelegs.

Many technological inventions benefit our pets. One that really stands out is a smart necklace that allows pet owners to monitor their pets’ pulse, breathing, and possible diseases. The idea is for veterinarians to be able to do long-distance checkups using this tool to be able to respond to any emergency in time.

People have also created locator necklaces, as well as automatic feed dispensers and even bark translators. In addition, many people have made useful apps for pets and pet owners.

And this is just the beginning! It’s expected that the development of artificial intelligence in new technologies will be used to train and accompany dogs and cats in the near future.

Animal lovers embrace those new technologies and are happy that they improve their pets’ lives.