Cynophobia: The Fear of Dogs

Researchers highlight that the main causes of cynophobia are related to traumatic childhood experiences. 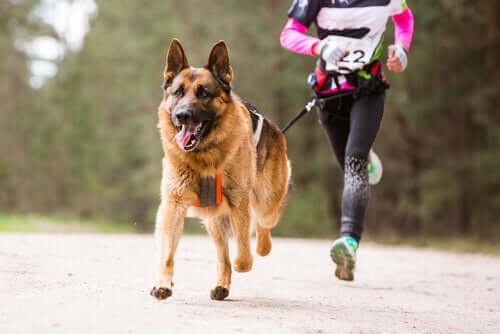 While most of us think of dogs as man’s best friend, the number of people that have a fear of dogs is increasing all the time.

Many people have a phobia of dogs, which they suffer daily. Below, we will learn more about cynophobia, its symptoms, causes, and treatment.

From a medical point of view, cynophobia is defined as follows: “a persistent, abnormal and unjustified fear of dogs or rabies that they might transmit.” Thus, a person suffering from cynophobia feels real panic when in the company of a dog.

In fact, in more severe cases, people can get symptoms of cynophobia just by imagining being in the same room as a dog. Dreams can also trigger the symptoms.

What is the difference between a phobia and fear?

‘Phobia’ and ‘fear’ are different concepts, meaning that they’re expressed differently. As humans, it’s in our nature to feel fear. Other animals can also feel fear. We use it as a defense mechanism that’s essential to our survival.

Fear makes us alert, and recognize and act in stressful or dangerous situations. It’s a very useful emotion to have.

However, a phobia is an irrational fear of everyday situations that can be harmless and sometimes unrealistic. Indeed, dogs can physically hurt people. Sometimes the dog is defending itself, or it could have been trained poorly. Cynophobia is a fear that goes beyond this.

When we have healthy fear levels, we analyze situations rationally. We then choose whether we want to adapt and overcome the fear, or avoid it and try to cope with the situation.

However, when this fear is irrational, we lose some control. It’s an unpleasant situation.

The feeling then exceeds rational capacity and our imagination often makes symptoms worse. This can reach the point where any rational explanation is lost to fear.

For example, when a person is afraid, they’ll keep their distance from large, powerful, and agitated dogs. This is quite a healthy reaction.

But when a person develops a phobia of dogs, they’ll show signs of panic when they see a small dog walking calmly on a sidewalk. Even if the dog is friendly and completely harmless, the phobia will prevent them from being rational.

The symptoms of cynophobia are similar to those of any other phobia, but concerning dogs.

In principle, all fear generates the sensation of discomfort, but in a phobia the suffering is increased. This is because it’s fed by the irrational character of excessive fear. This psychological discomfort leads to the appearance of the following physical signs:

However, researchers pointed out that most phobias are related to traumatic childhood experiences. Where cynophobia is concerned, most patients interviewed explained that they had a negative experience with dogs in the first 10 years of their life.

It was also discovered that people who influence a child’s early education, such as parents or teachers, can ‘pass on’ phobias. Therefore, we need to be cautious when introducing children to dogs.

The fear of dogs: can you prevent it?

Attempting to prevent phobias is often more complicated than targeting a specific cause for its development. Currently, psychologists specializing in cynophobia refer to early and gradual exposure as the best form of prevention.

Since children are more likely to develop phobias, we need to expose them to fewer traumatic situations, as well as avoiding passing on our fears to them.

Logically, it’s important to teach them to prevent and adopt safety measures, but also to prioritize rational methods by using positive reinforcement.

The Fear of Dogs: How To Overcome Cynophobia
Everybody knows the phrase: Dogs are a man's best friend. However, not all humans agree. Today we'll look at how to overcome cynophobia, the fear of dogs. Read more »
Link copied!
Interesting Articles
Dogs
Can Music Relax Dogs?