These documentaries reflect their life cycles, from how they feed, how they practice survival techniques, to how they reproduce. 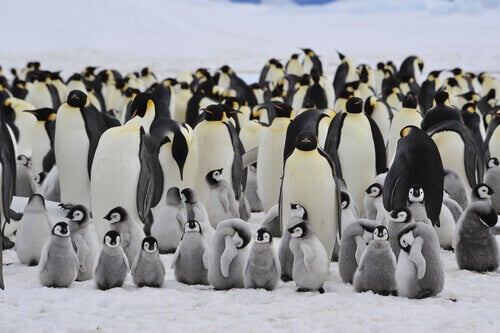 If you want to learn a little more about nature, the fascinating adventures of animals and, in some cases, the dangers they have to overcome due to pollution and climate change, we recommend the following animal documentaries.

Which animal documentaries to watch?

Whether in Antarctica, South Africa, or the Arabian Peninsula, animals surprise us with their survival, feeding, and reproduction techniques. In the following animal documentaries, you’ll learn more about some fascinating species:

This isn’t a story of the ancient Romans or the Chinese dynasties. It’s about the journey taken by thousands of emperor penguins every year through the frozen lands of Antarctica. This region is famous for its adverse climatic conditions – the temperature can reach -40°C (-40°F). So, this bird that doesn’t fly, but swims very well, must cross a frozen plain to survive.

The Emperor’s Journey –in the photo at the beginning of this article– shows the preparation, obstacles, and organization of penguins so that their offspring can perpetuate the species.

2. The Cove: one of the most touching animal documentaries

This documentary was directed by a former dolphin trainer for the Flipper series named Ric O’Barry. Thus, he brings us one of the “hard-core” animal documentaries telling the real story of this species. The now defender of the rights of cetaceans tells how a specimen “tried to commit suicide” by voluntarily closing its breathing hole when it was captured to be taken to an oceanarium.

In The Cove, the man infiltrates the fishing port of Taiji, Japan, to document dolphin hunts. This practice results in the killing of more than 23,000 dolphins each year.

This is another of the animal documentaries speaking of the long journeys that certain species must undertake during the migration season. In this case, it’s a short film made in 2001 about the “birds of passage” that fly tirelessly for miles depending on the season.

In Winged Migration –a French production– we’ll get to know our planet from a bird’s point of view, from up high. Therefore, to film the documentary, the producers used hot-air balloons and ultra-light aircraft.

It’s undoubtedly one of the best documentaries on wild animals. The Last Lioness accompanies the lioness Lady Liuwa, who lives in the Liuwa National Park in Zambia, Africa. It’s the only female of the species in the whole area and must learn to survive on its own. It leads a very lonely life, something that in “normal circumstances” wouldn’t happen.

Besides seeing first-hand this beautiful lioness who “befriended” the camera portraying its whole life, the documentary strongly criticizes poaching on the continent. The lack of regulation of this practice, trophy hunting, and illegal sale are responsible for the situation of Lady Liuwa.

The last of the animal documentaries on this list is a cinema feature film, which both summarizes and complements a TV series called Planet Earth produced by BBC. Earth is a production of almost 100 minutes during which you’ll be absorbed by the beauty of the landscapes and the marvels of nature.

The objective of this production is to highlight the most amazing aspects on the planet in terms of biodiversity. Therefore, we can see everything from a humpback whale to an African elephant. One of the best scenes is the sequence that begins in space and ends with a close-up of a polar bear in the middle of the Arctic. Another memorable shot is that of elephants cooling off in a pond of the Okavango river.

7 Places to See Animals in the Wild
There's no better way to learn about nature than to see animals in the wild., seeing them in their natural habitat where people are simply spectators. Read more »
Link copied!
Interesting Articles
Wild Animals
Yellowstone: the World's First National Park

Wild Animals
What Are Wildlife Crossings?
Interesting Articles
Mammals
All About the Caracal: Characteristics, Feeding and Habitat