Despite the many legends, this is the first documented case of a whale showing such solidarity towards a human. Nan Hauser was rescued from a shark attack, showing yet again just how intelligent and empathetic these animals are. 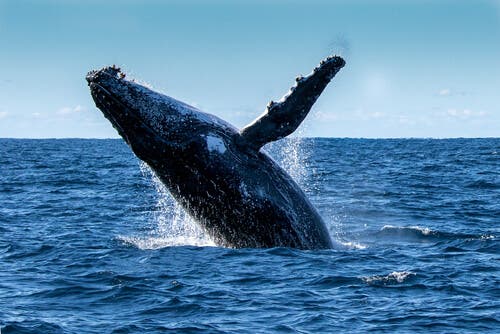 In January 2018, something incredible happened: a humpback whale saved a diver’s life by protecting her from a shark. Sailors have always told stories about whales and dolphins helping humans in trouble, but could this be the first real proof we have?

Nan Hauser is a 65-year-old biologist who has been diving with whales for 30 years. In January 2018, she was doing a routine dive when a humpback whale, an animal she knew well, began to behave very strangely.

As her video footage captured, the animal didn’t seem to want to let her dive. When she tried to go towards the bottom, the whale pushed her back towards the surface with its head.

For more than 10 minutes, Hauser was trying to understand the whale’s behavior. She said that she had never been so close to one of these animals for such a long time, and after the struggle, she was already quite bruised.

Saved by a humpback whale

It seems that the whale wanted to keep the biologist close to it. But, even if this was an act of kindness, it’s dangerous for something as small as a person. With one wrong movement, a whale could easily deliver a blow that could break bones or damage vital organs.

As a result, Hauser decided to return to the boat where her companions were waiting. When she moved a little further away from the whale, she realized that there was another animal next to them: a 13-foot-long tiger shark.

Suddenly, Hauser understood what was going on. The humpback whale had been trying to protect her the whole time. She hadn’t seen the shark and had been focused on the whale instead. It now all became very clear.

Speaking to British newspaper The Mirror, she said:

“I tried to get away from him for fear that if he rammed me too hard, or hit me with his flippers or tail, that would break my bones and rupture my organs. If he held me under his pectoral fin, I would have drowned. (…) I didn’t want to panic, because I knew that he would pick up on my fear. I stayed calm to a point but was sure that it was most likely going to be a deadly encounter.”

Thanks to her extensive experience diving with such large animals, Hauser knew how to keep calm and not make the whale nervous. Only then could she get back to the boat where other divers were waiting for her and were able to pick her up.

To her surprise, after getting on the boat, the whale came to the surface for a moment to make sure that she was OK. As the video shows, the whale takes the opportunity to breathe, and while Hauser thanks him for saving her, he dives below and swims away.

Altruism in whales and other cetaceans

Sailors have been telling stories for centuries in which dolphins and whales save people’s lives or help humans in trouble. There are legends of dolphins accompanying drifting sailors to dry land, for example, but we’ve never really had any documented evidence – until now.

Biologists who study cetaceans are aware that altruism exists in these mammals. For years, whales have been observed protecting seals from predators, but this has never happened with a human.

Nan Hauser published the video of her encounter with the humpback whale in the hope that it could help research into whale intelligence and behavior. This could be really useful because animal psychology is still very much a mystery.

It seems that all those stories of dolphins or whales helping humans might not be exaggerations after all. But we still have a lot to discover about these animals’ intelligence and behavior.

9 of the Best Places to Spot Whales
They're the largest animals in the world and a spectacular sight to behold when migrating. We'll tell you about some of the possible places to spot whales. Read more »
Link copied!
Interesting Articles
Wild Animals
Yellowstone: the World's First National Park