Symbiosis in the Animal Kingdom

Symbiosis is a biological relationship between two specimens, through which one or both of them benefit. Sometimes, this relationship can be harmful to one of the parties. Take a closer look at symbiosis in the animal kingdom in the following article. 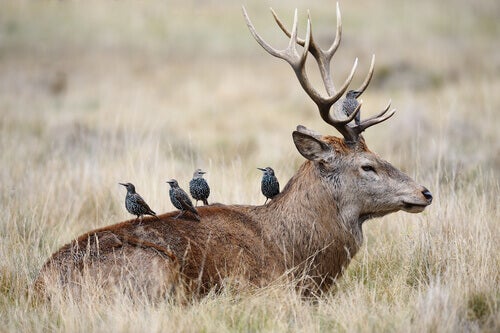 Symbiosis is a term that comes from Greek, literally meaning ‘living together’. In nature, these ways of life allow different living beings to establish interactive biological relationships. Below, we’ll analyze the symbiosis of the animal kingdom and its importance for the survival of many species.

The definition of symbiosis

We often hear that some people demonstrate an interaction that’s so strong and natural that we call it a “symbiotic” relationship. In this way, popular culture can help us understand in simple terms what symbiosis in the animal kingdom is.

We must remember that, in reality, not all symbiotic relationships are positive for all types of species. In many cases, this relationship can even be harmful to some species.

Symbiosis in the animal kingdom encompasses a set of interactive biological relationships that produce benefits for some of the species involved. Such interactions must take place between similar living beings, even between living beings and plants, and persist in time in order to count as symbiosis.

There are several kinds of symbiosis, in a generic way, which fall into two large categories:

Types of symbiosis in the animal kingdom

The degree of integration developed between symbionts generates different types of symbiosis. Many animals live together to benefit from their respective presences, by establishing a simple relationship.

However, some species manage to make genetic transfers and generate new individuals, which takes place in an intense interaction. Below, we’ll summarize the main characteristics of the three main types of symbiosis in the animal kingdom:

Mutualism is the most beneficial form of symbiosis that two animals can establish with one another. These interactions inspire the popular use of the expression ‘symbiotic relationship’, which presupposes a ‘positive-positive’ interaction.

Mutualism can be established as a direct exchange of resources or services or as an interaction between natural resources and service. But the two species always benefit equally from mutualism and improve their biological well-being through such a relationship.

In commensalism, biological interaction generates benefits for one of the species involved. However, the other animal doesn’t suffer any harm from the benefit it provides directly or indirectly. We can define this as a ‘positive-neutral’ relationship.

Parasitism presupposes an unequal relationship, where one species benefits, to the other species’ detriment. In other words, it’s a ‘positive-negative’ interaction. Generally, parasitic symbiosis represents a severe risk to the health of the host animal.

Examples of symbiosis in the animal world

To improve your understanding of the types of symbiosis in the animal kingdom, we’ll look at some real examples of mutualism, parasitism, and commensalism.

Ruminant mammals have several different microorganisms in their stomach cavities. The natural action of these microorganisms allows herbivorous animals to digest the cellulose present in vegetables.

At the same time that digestion takes place, the nutrition of these tiny living beings is guaranteed. Therefore, this symbiotic relationship is one of mutualism and not one of parasitism.

Something very similar occurs in the intestinal flora of human beings, which is full of beneficial bacteria. These tiny beings favor the digestion of food and protect the colon of the intestine.

At the same time, they receive a safe haven, where the molecules necessary for good nutrition abound. As you can see, this is another demonstration of endosymbiotic mutualism.

Symbiosis in the animal kingdom: Examples of parasitism

A common example of this symbiotic relationship occurs when certain parasites affect domestic animals, wild animals in their ecosystem, and humans.

When we talk about endoparasites, such as tapeworms or worms, we’re talking about a parasitic endosymbiosis. On the other hand, in the case of ticks or fleas, we’re looking at an example of parasitic ectosymbiosis.

Commensalism in the animal kingdom

The most classic example of commensalism occurs when vultures feed on prey killed by other predators. Because these birds cannot hunt, they must consume these remains in order to survive. Although it benefits only one species, this commensal relationship doesn’t harm or interfere with the well-being of the other animals.

The Elderly and Dogs: A Proven Symbiosis
If you have an elderly person in your life, you should be aware of the benefits of the elderly and dogs. Dogs can help the elderly significantly. Read more »
Link copied!
Interesting Articles
Wild Animals
5 Species in Critical Danger of Extinction