Home » Relating with their Environment

How to Help Cats and Dogs Get Along

When two people don't get along, we may say "they fight like cats and dogs"... But is it really impossible for cats and dogs to get along? Actually, cats and dogs can becomes great friends if pet owners take their particular personalities into account and act accordingly. 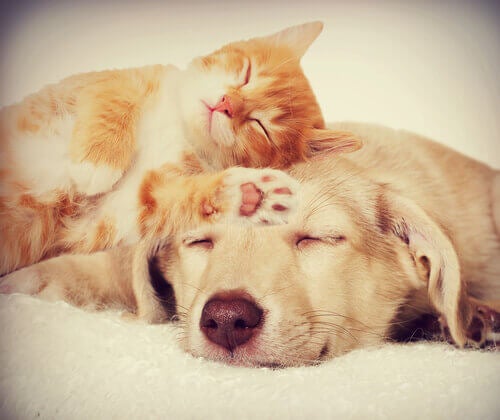 Cats and dogs have long been known for having one of the most famous rivalries on the planet. So, how can we help cats and dogs get along better? Today, we’ll offer a series of techniques that will help improve the relationship between both species.

The greatest of enemies

Over the course of history, we’ve witnessed a series of rivalries between cats and dogs that have led us to believe that these animals detest one another. While it’s true that there’s a certain degree of antagonism between these domestic pets, it is possible for cats and dogs to get along.

It’s true that there’s a hunter-prey relationship between these two species. To be more specific, dogs are the hunters and cats are their prey.

The attitudes of both animals also reveal a lot about the role each one plays. However, things don’t always go the same way. It’s not uncommon for the roles to reverse… it really just depends on the unique personality of each animal.

Despite their historical animosity, there have been many cases of cats and dogs living in perfect peace and harmony. Which leads us to the question: how do they do it? And the answer comes down to training.

The key to helping cats and dogs get along

If you’ve made the decision to have both species in your home, we can’t blame you. Both of these animals are marvelous pets and there’s so much we can learn from them. And to help your furry companions get along, you’ll need plenty of patience.

The first step consists of understanding the personality of each of your pets. Remember that there are a great many cats with shy and skittish personalities. And, of course, there are also plenty of felines that are friendly and affectionate.

In the same way, some dogs can be very aggressive and dominant while others can be gently and playful. And when it comes to keeping the peace between cats and dogs, it all comes down to their personalities.

Once you’ve determined that your current pet (cat or dog) can get along with another species, it’s time to bring in a new companion.

In order for these animals to coexist properly, we’ll give you some tips that will help cats and dogs get along:

Introducing a cat to a dog

This scenario tends to be the most common. And the best thing we can recommend in this case is to follow the process of adapting a cat to a new home. Just let your dog smell the scent of your cat until it gets used to it.

Once that happens, you can allow your cat to roam free in your home. However, you should keep your dog tied up so that it can’t startle the cat. Little by little, you can give your dog more freedom, making sure that both animals tolerate one another without causing injury.

Introducing a dog to a cat

The arrival of a dog to a cat’s home can be more offensive for felines. Therefore, you should pay special attention to your pet’s behavior.

It’s important to point out that cats have more intuition than the incoming dog. Therefore, your cat will already know what’s going on before the dog sets foot inside your home. And, depending on your cat’s personality, it may hide or it may stay right where it is.

When the dog arrives, it’ll start sniffing the area and sense the presence of a cat. In this situation, it’s crucial that you pay close attention to the behavior of both animals.

More often than not, the dog will continue inspecting its new home and taking occasional glances at the cat. When the dog is finished, it will already have accepted the cat as part of its new home.

What happens if they don’t get along?

If you discover that your cat and dog don’t get along, you’ll have to look for ways to encourage a better relationship. Why not set the example yourself? When petting or cuddling with one of your pets, don’t hold back. This action will reinforce the idea that you accept both of your pets, and your pets should learn to do the same.

More than likely, the other animal will approach asking for affection, which gives you the opportunity to pet both. What’s more, this scenario helps prevent jealous conflicts that can arise between animals.

Try using a warm cloth. This technique consists of wiping it over one of your animal’s fur and then doing the same with the other pet. The point here is to create a sort of association between the scents of both animals.

And the most important thing to remember is patience. Not all animals are alike, and this process will take several days to be successful. Try not to force your pets to interact, or they may associate their encounters with hostility.

The Differences Between Cats and Dogs
There are so many differences between cats and dogs and in this article we'll be seeing to what extent you can train your cat. Read more »
Link copied!
Interesting Articles
Relating with their Environment
Hyperactivity in Pets: How to Handle Lockdown

Over the course of history, we've discovered that dogs have the capacity to carry out a great variety of activities...…