7 Mythological Animals and Their "Powers"

These beings, which are related to fauna, are popular in the legends of some cultures. All of them have powers or qualities that make them different from other real species of animals. 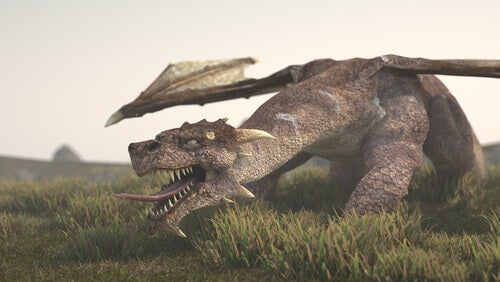 Dragons, phoenixes, and centaurs are just some of the best-known mythological animals. However, there are so many more! In this article, we’ll tell you about several of them and, of course, what their main powers are.

What are mythological animals?

As the name suggests, these are beings related to animals. They appear within myths and legends of different peoples or cultures. Each one has powers or characteristics that distinguish them from ordinary animals. Among mythological animals we can highlight:

These are winged reptiles – like the one in the photo at the beginning of this article. They are the most powerful mythological beings in most legends. In fact, these animals appear in legends from Asia, Europe, America, and Oceania. One of their main characteristics is that they can spit fire and fly.

Within dragons, there are several species. For example, there is the Shenlong (causing rains and draughts), the Sirrush (considered intelligent and feared by humans), the Moo-Kuna (sociable with the ability to change shape).

In fact, the dragon is so popular in China that you can see them featured in monuments, in works of art, decorative objects, traditional costumes, shields, and coins.

Metaphors about this animal are widely heard when someone is able to succeed after experiencing difficulties. This is because the phoenix rises from the ashes. Myths of this animal originate in Egypt. According to legend, every 500 years this animal is reborn after purification by fire.

When the time came for the phoenix to die, they made a nest and laid a single egg. Then, they incubated the egg for three days. After bursting into flames, the bird would burn completely. Later, it would emerge from the egg.

Similar to the Egyptian sphinx, this mythological animal has the body of a lion, the head of a man, the wings of a dragon or bat, and the tail of a scorpion or a dragon. This is an imposing beast that was very popular in European legends. According to legend, they lived in ancient Persia.

This is another powerful being in popular culture. In fact, these animals are said to love eating humans after shooting poisonous thorns at them. During the Middle Ages, this was a symbol of tyranny, envy, oppression, and the embodiment of all evil.

This winged horse is another well-known mythological animal. According to myths, Zeus, the god of heaven and earth, used this animal. They were born from Medusa’s blood after she was beheaded.

According to legends, they can be black or white. They have two wings and, while flying in the air, they actually move their legs as if they were running or galloping. In the world of cinema, they appear in films such as Hercules and the Clash of the Titans.

This creature is made up of two animals. The lower part of the animal is a lion with yellow fur, a long tail, and muscular legs. The upper part is a giant, golden-feathered eagle with powerful claws and a sharp beak.

According to myths, this animal is stronger than a big cat. They came from the Middle East area, such as Babylon, Persia, and Assyria. However, they are also present in Greek legends. In fact, the god Apollo used Griffins as guardians of his treasures.

This character is from Roman mythology. However, Greek mythology referred to them as Pan. They have a ram’s legs, a man’s body, and a goat’s horns. Fauns also were great hunters and lived in the forests and plains.

Some ancient people worshiped these mythological animals as gods of the field and shepherds. People also believed they were prophetic deities. In fact, there are still many monuments and statues honoring fauns in various regions of Italy.

Finally, we’ll look at a being with the body of a man and the head of a bull. According to myths, this creature was locked in a labyrinth on the island of Crete. They received seven women and seven men as food each year. Ultimately, Theseus was in charge of entering the maze and annihilating the beast after a hard fight.

Names For Hunting Dogs Inspired By Greek Mythology
Naming a pet is always hard, especially if he's going to be your hunting partner. In this article, we'll give you some ideas for names for hunting dogs. Read more »
Link copied!
Interesting Articles
Wild Animals
5 National Parks in Africa You Can't Miss