It's not always true that species that live in rivers also live in the marine ecosystem. However, a good number of them have adapted to these water currents and their unevenness to reproduce or to feed. 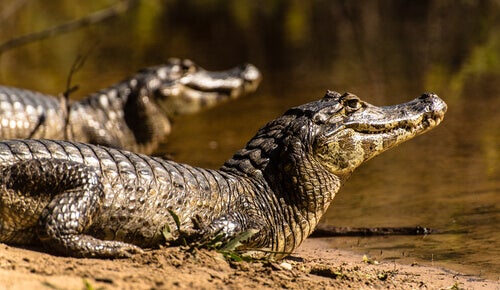 The Amazon, the Nile, and the Guadalquivir all have a different fauna. Just the same, they share certain characteristics with each other. For example, the fact that they’re natural water currents that flow into the sea or into smaller tributaries. In this article, we’ll tell you about the animals that live in rivers: species that have adapted to their currents and unevenness.

Animals that live in rivers

Within the fauna of the rivers, we must understand that they don’t always coincide with species that inhabit seas and oceans. However, some marine animals take advantage of the characteristics of the currents or slopes to spawn or feed. Among the animals that live in rivers we can highlight:

These creatures are characterized by an elongated body similar to that of a snake. The eel is one of the oldest non-extinct species on record. Fossils have been found from the Cretaceous period.

It has no scales and, once it’s born, it allows the current to drag it until it reaches the high course of the rivers. It can live more than 15 years and uses its last months of life to return to its place of birth and die there.

This crustacean is abundant in streams and rivers, where it takes refuge among the rocks on the river beds to avoid being caught by predators.

As with other arthropods, the crayfish molts its exoskeleton but has a longer external morphology than the rest of its family.

This is the largest rodent in the world and lives in herds within tropical and temperate regions of South America. It spends all its life around rivers, mangroves, lakes, and marshes, as it needs firm ground to sleep and thick vegetation to protect itself from danger.

The capybara feeds on grass and water plants, including sugar cane and corn. As for reproduction, it takes place in shallow waters and at any time of the year. Females don’t build nests or burrows but give birth in different places within their territory.

This is the largest reptile on earth. It’s also one of the oldest non-extinct species since its appearance in the Cretaceous period. Its body is robust and it has a large tail and small eyes. The crocodile lives in rivers such as the Nile, the Yangtze, and the Ganges.

Crocodiles are faster and more skilled in the water than on land. However, they come out to the shore to warm up because of the sun -as they’re cold-blooded- and in some cases to feed. They prey on all kinds of animals, even those bigger than them.

This fish is born in high mountain rivers that have fast currents and rocky bottoms.

Salmon always migrate to the sea when they’re three years old, although they always return to the river to reproduce. This requires a tremendous amount of effort, as they must swim and jump against the water current.

The two current species of hippopotamuses – common and pygmy – have large, robust bodies and large heads with pronounced nostrils.

They live in the rivers of sub-Saharan and West Africa. At sunset, they always emerge from the water in order to feed themselves and may spend several hours eating (they’re herbivores).

Although they’re not animals that live in rivers, they spend a lot of time in the vicinity of the waters to provide themselves with food. Among these wading birds, we can highlight cranes, coots, storks, and herons. They inhabit almost every continent, except for Oceania and Antarctica.

These birds have long necks and legs, and their beaks allow them to get fish or frogs from the river bed.

It should be noted that this river turtle is only present in the basins of South America, specifically in Colombia; it has a gray or brown shell.

It’s considered in danger of extinction due to hunting and the low survival rate of the eggs deposited by the females on the shores or beaches.