Why Do Cats Have Whiskers on Their Front Legs?

Did you know that cats have whiskers on the back of their front legs? Take a look! They're called carpal vibrissae and form part of their sixth sense. 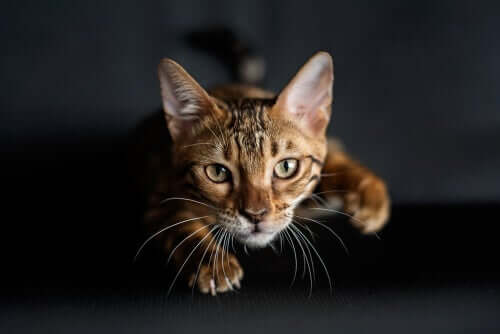 Did that surprise you? Cats have whiskers on their front legs, and it’s possible that, until today, you hadn’t noticed. If you’ve never noticed them before, take a look at your cat right now. You’ll see that they’re exactly the same as the ones on the eyebrows and chin. These whiskers grow on the back of the leg, near the fifth toe of the foot.

Firstly, it’s important to realize that whiskers aren’t just hairs. Under the skin, the follicles are different from ordinary hair, both in their structure and function.

They’re much stiffer and more deeply rooted than ordinary hair follicles. One particular feature of them is that they’re very sensitive. They have a lot of nerves and have a large supply of blood. For this reason, lighter contact with the whiskers sends a signal to the brain.

Why do cats have whiskers on their legs?

First, let’s recap what whiskers are and what they do. Whiskers are thick hairs that grow inside a sensory cell and their main function is to detect movement. And they’re very good at it.

Facial whiskers are so sensitive that they can detect even small air currents. They work a cat’s radar. This helps them to hunt, orient themselves, and anticipate movement.

Some studies of carpal vibrissae suggest that they work to adjust the rigidity of the legs, anticipating each step depending on the terrain. It’s an interesting idea which is currently being trialed.

The whiskers on the legs are leftovers from a previously wild existence. Whilst many domestic cats today don’t need to hunt their food, many still do by choice.

The carpal vibrissae, the key part of the feline sixth sense

Despite what you might think, a cat’s short-range eyesight is actually not particularly sharp. This means that when a cat is very close to something, like its prey, it won’t be able to see small movements.

Of course, this can be the difference between having dinner and going home hungry. This is where the carpal vibrissae make all the difference.

Cats have whiskers because they need them. You should never cut them. It’s a common mistake to think that cats’ whiskers need to be trimmed. Some cats like the Cornish rex, even have curly whiskers, so people wrongly assume that they’re just normal hairs that can be trimmed. It’s a mistake!

Never cut a cat’s whiskers! Without these tactile hairs, cats can become very disorientated and scared.

In summary, whiskers enable cats to measure things and make sense of their surroundings. They need their whiskers to remain intact, and they use them in the same way that we use the nerves on the tips of our fingers to feel our way through the dark.

Night Vision in Cats – What Do We Know About It?
Cats are usually more active at night than during the day. So, we're going to tell you everything you need to know about night vision in cats. Read more »
Link copied!
Interesting Articles
Cats
The Donskoy Cat: Bald, Affectionate, and Intelligent