How Do Dogs Recognize Family Members?

Have you ever wondered how dogs can tell between familiar and unfamiliar faces? Today on My Animals, we're going to tell you all about this phenomenon. 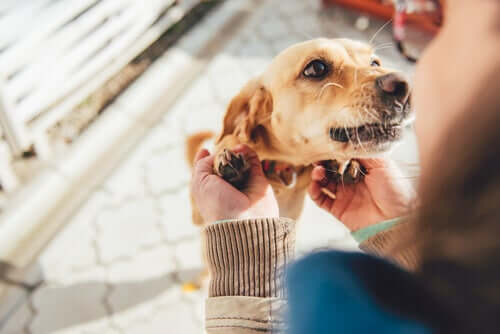 Telling familiar and unfamiliar faces apart is a relatively easy task for humans. That has a lot to do with our brains and the way they’ve developed over time. But have you ever stopped to wonder about how other animals, like dogs, recognize other members of their species, or members of their family? Keep reading for all the answers.

Dogs and their senses

No one would argue that dogs are one of the most loyal and inseparable of all pets. They’re usually the first ones to hear you come home, and will immediately bolt over to greet you. Everyone knows that dogs are able to recognize people extremely fast thanks to their excellent sense of smell.

Smell is actually their strongest, most well-developed sense. You can see that in the sheer number of smell receptors they have. Scientists estimate the number to be somewhere between 200 and 300 million. That’s absolutely enormous compared to the 5 million humans have. A dog’s sense of smell is one of its best ways to recognize things and people.

But that doesn’t mean that sight and sound aren’t important senses for dogs. It’s actually in their ability to combine smell and sight that dogs are able to tell people and animals apart.

How do dogs recognize family members and other people?

There are lots of different studies that claim that the areas of the cerebral cortex that light up when a dog sees a face are the exact same areas that light up when we do. That would mean that dogs do, in fact, use their sense of sight to tell the difference between familiar and unfamiliar faces.

Going even farther, there’s some scientific evidence to suggest that dogs can rely entirely on facial recognition. That basically means that they only need to see a face to tell if a person is familiar to them or not. Of course, that means they have trouble recognizing us when our faces are covered. That’s when they use their sense of smell.

Not only can they tell faces apart; dogs can even recognize some of the many facial expressions we make. More interesting than that is the fact that dogs apparently prefer to see the faces of other members of their own species than the faces of any other.

Can they recognize their canine family members?

So, we’ve solved the mystery of how dogs are able to recognize us. But now, there’s still the question of whether or not they also have that ability with members of their own species. Once again, we can find the answer to that in scientific studies.

In one study, researchers placed four puppies in front of two adult females. One of them was their mother. The results showed that in the majority of cases, the puppies had a preference for approaching and spending time with their biological mother.

But what about once the puppy grows up and becomes an adult? To see if they were still able to recognize their mothers, the researchers used pieces of clothing. One had the scent of the puppies’ mother, and the other the scent of other dogs of the same breed and age.

The results were positive yet again. The young dogs (about two-years-old by this point) could still recognize their mother’s scent. This was even the case when they had been apart for a long time.

We still don’t know very much about the biomechanics at work in this process. However, it’s yet another piece of definitive proof that dogs are able to recognize their loved ones. So, if you’re ever worried about this, don’t worry; your dog can recognize you even outside the home!

Dogs and Witchcraft: A Brief History
Today we want to take a quick look back on the history of dogs and witchcraft. You'll soon see that dogs have done much more for us than mere domestic work. Read more »
Link copied!
Interesting Articles
Dogs
Dog-Friendly Movie Theaters