The Dogs that Protect Wild Animals

Species like the cheetahs, lions, elephants, or gorillas are protected by trained dogs. They can be German Shepherds, Weimaraners, or Belgian Shepherds. In this article, discover the dogs that protect wild animals. 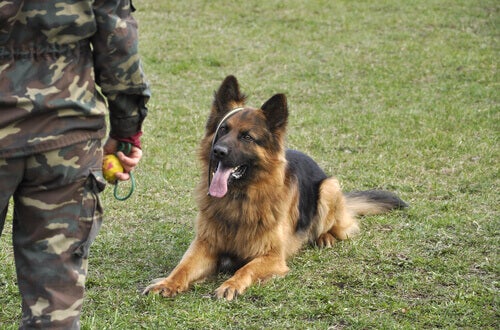 Throughout history, dogs have done many different tasks to help humans. In fact, one of the tasks these four-legged friends do is protect wild animals and livestock. In other words, the domesticated animals raised in agricultural settings that have accompanied man for centuries. Find out about the dogs that protect wild animals in this article.

However, in recent years, people tend to use dogs for other purposes. This has allowed various wild species to enjoy greater protection. You can find dogs that protect wild animals in various countries, especially on the African continent.

The reality is that dogs that protect livestock also allow a greater protection of wild animals. Human beings are protecting wild animals more than ever, which has had an impact on livestock.

Although we must certainly protect wild animals, the truth is that wolves, lions, and other carnivores continuously attack livestock. This form of food production is in constant contact with wildlife, and we must respect it.

However, the proliferation of factory farms has rendered shepherds and farmers unable to compete, as people want to consume cheap animal products.

This makes it increasingly difficult for them to protect their livestock from wild animals. In fact, it’s the reason why some resort to horrible acts such as poisoning, which is worse when they do it to endangered species.

Although these people should face time in jail for these horrible acts, it’s true that all society is to blame. Perhaps we should consume sustainable products from areas where the wolf or lynx are attacking livestock so that these farmers can coexist with wild animals.

The dog breeds that protect livestock

Around the world, many different dog breeds protect livestock from predators. In Spain, the Mastiff and its guarding instinct is well known. But other breeds also protect wild animals and livestock.

The Anatolian shepherd is one of the most popular. This dog can help protect the fastest land animal on the planet: the cheetah. Cheetahs have been persecuted for attacking livestock owned by herders in Namibia and other African countries. This is why wildlife conservation organizations have begun gifting Anatolian shepherds to the farmers in these areas.

Thanks to this initiative, farmers have begun to perceive the positive impact of the presence of large predators.

In fact, many of their children have started working as tourist guides or even as trackers and researchers promoting nature conservation. And so have dozens of mastiff and sheepdog breeds, each adapted to a particular region, livestock, and predators. For example, the Tibetan Mastiff and the Himalayan Shepherd have protected goats from the snow leopard for centuries.

Dogs that track poachers and wildlife

An example of this are Bloodhounds, which have been used in the oldest natural park in Africa: Volcanoes National Park. This is the home of hundreds of endangered species, among which the mountain gorilla stands out, which Dian Fossey gave her life for.

These dogs known as congohounds keep poachers, who dare to set traps in the park, at bay. Although Dian Fossey’s work greatly reduced poaching, some poachers still set traps to catch and feed on antelope. However, these traps are also a danger to gorillas.

Other breeds, such as the Weimaraner or the Belgian Shepherd, have been used in the Kruger National Park, famous for its lion and elephant populations. These dogs quickly locate poaching scenarios to then locate potential offenders.

K9 Conservation has been working in this area for several years. This organization managed to unite the efforts of dogs and rangers to quickly locate animals that are victims of poaching. Thanks to this, they’ve managed to save the lives of many rhinos that were abandoned by poachers after removing their horns.

Meanwhile, Big Life Tanzania has used German shepherds in its fight against poachers. These dogs have amazing tracking skills and protect the fauna of Tanzania. Their ability to locate substances has led to the arrest of many poachers transporting carcasses to sell on the black market.

A positive thing for dogs themselves

In an incredible way, dogs that protect wild animals are becoming more common in protected environments. Our hope is that this will help endangered species. In addition, using dogs to conserve nature is also positive for these four-legged friends.

Working dogs are trained with positive reinforcement, and fulfilling their tasks is stimulating and enriching for them.

In addition, many breeds have been losing their usefulness due to changes in animal husbandry and the growing sensitivity to animal abuse. So, the dogs that protect wild animals may be breeds that have lost their ancestral aptitude.

Protective dogs: Can your dogs sniff out bad intentions?
They say dogs are a man's best friend, and that's often true. Once you forge a relationship with them, you'll have someone that will always stay by your side and be willing to sacrifice himself for you. Read more »
Link copied!
Interesting Articles
Dogs
Meet the Wetterhoun: The Frisian Water Dog