The Elderly and Dogs: A Proven Symbiosis

We all know that having a dog is beneficial for owners. Here, we'll look at studies that demonstrate this symbiosis with the elderly. 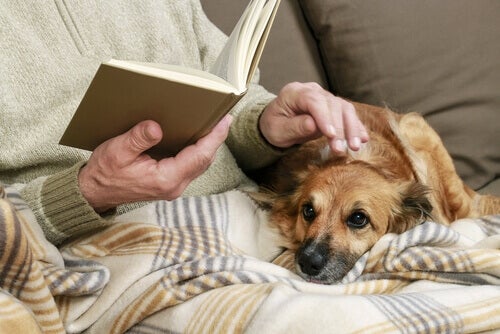 We all know that dogs bring joy and energy into a home, regardless of how old the owners are. The animals are energetic, loyal, affectionate, and love to be around people, making them ideal for alleviating loneliness. This makes the elderly and dogs ideal companions.

Still, few people have actually read about the scientific evidence that confirms the benefits of having a dog in our lives. In fact, this interaction is even more important with the elderly. In this article, we’ll show you how well the elderly and dogs work together.

A longitudinal study about the elderly and dogs

The first study we’re going to discuss looks at the relationship between the physical condition of elderly people and the presence of a pet in their daily routine:

The results were illuminating. The presence of a dog or cat at home significantly increased the DAL of the elderly in general.

Researchers in the scientific community know that maintaining an active lifestyle reduces the chances of falls and fractures. In addition, it helps slow down the process of bone and muscle wear associated with age. Dog owners go out for walks, exercise, play with their dogs, and interact at different levels. Although this may not seem like much, this small daily exercise can have great benefits for the elderly.

The elderly and dogs: Canine assistance for people with dementia

The second study was published in 2008. Researchers tried to investigate the relationship between animal therapy and the development of dementia in the elderly:

In the control group, which only underwent normal treatment, the variables listed above increased considerably by the end of the follow-up period. However, in the group that received animal-assisted therapy, symptoms were constant and there was no worsening over time of older people with dementia.

Of course, there’s no magical treatment for this type of disease. However, the fact that dementia patients maintained constant variables thanks to animal care is already a huge advance. These results demonstrate that animal therapy would help curb symptoms of neuropsychiatric degeneration in the elderly.

There are countless other studies like these ones. For example, other research from 2014 shows that the elderly with dogs perform 12% more exercise on average than those who don’t have an animal in their lives.

However, the interaction between the older person and the animal does more than just offer a physical benefit. Like dogs, we’re social animals. In fact, we require company, even if it’s from beings of another species. In many cases, the elderly are removed from a fast-moving society.

People don’t take time to stop and chat with elderly people often. However, dogs are loyal, faithful, and attentive. Above all, they know how to understand human emotions and react accordingly.

As you can see, there are multiple scientific studies that show how dogs are the perfect companions to help alleviate symptoms from isolation, neurodegenerative diseases, and physical atrophy, among others. If this is interesting to you, we encourage you to do your own research on the topic. There are so many scientific studies that deal with these ideas.

Companionship Between Dogs and the Elderly: How it Affects Their Health
When you are older, you should care more about your health. This is why throughout history, one of the most important medical concerns has been finding ways to improve the health of the elderly. Companionship between dogs and the elderly improves their health. Read more »
Link copied!
Interesting Articles
Dogs
Should I Take My Pet to My Wedding?