The History of Dogs in the Second World War

Today, we want to take a look back at the tragic history of dogs in the Second World War. 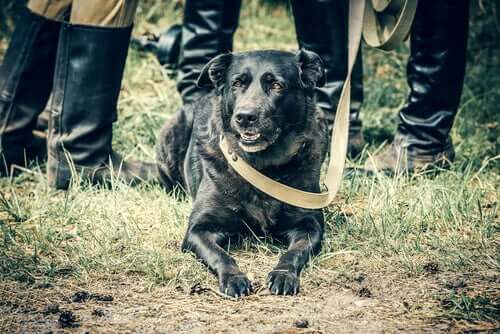 Dogs have been at mankind’s side for millennia. But while they have long held the title of “man’s best friend”, they have also been involved in some of the worst armed conflicts the world has ever seen. In fact, dogs played a huge role in the Second World War.

Going back even further, experts believe that the Greeks and Persians used dogs in their military campaigns. Furthermore, early European settlers in America used breeds such as the Spanish Alano in their efforts to conquer the New World.

Our canine companions have played a part in many significant events throughout history, including World War I, and even ongoing conflicts today. But it was undoubtedly during the Second World War that dogs made their most notable contribution to the war effort, helping to save thousands of lives. Sadly, many dogs also died in action.

Despite what many people might think, dogs didn’t simply act as messengers or search and rescue dogs. Many were directly involved in military conflict and were even used on the front lines, with many losing their lives in this devastating human conflict.

For example, the US army attempted to train large dogs to attack Japanese soldiers. The program took place in a specialist canine training facility, with many Americans of Japanese descent participating in training exercises. Although the project was a fail, they later perfected it for use in the Vietnam war.

One of the best-known tactics involving dogs was the anti-tank dog initiative. This was a particularly ruthless and inhumane practice, mainly carried out by the Soviet Union. The Russians trained dogs to search for food under tanks. The dogs were then left to starve for several days, eventually becoming so hungry that they would practically throw themselves at the tanks.

Once the dogs were fully trained, explosives were strapped to their backs, and they were sent out into battle to blow up enemy tanks, killing them in the process. As a result, dogs became a prime target, with enemy troops attempting to kill them before they reached their tanks.

Although draft horses were the animals of choice when it came to transportation, people also used dogs to help pull machine guns or stretchers. During the Second World War, the Red Army often used dogs to navigate snowy terrain and uneven battlegrounds, as horses could easily break their legs.

Some dogs also served as messengers, silently carrying messages across no-man’s land. Others learned to plant explosives or lay telephone lines. Because of their small stature, they were able to crawl through tunnels and holes that were too narrow for humans. Many countries also used other animals for these tasks, including ferrets.

Several canine tracking breeds were used to detect mines. However, the use of negative reinforcement in training meant that many training programs failed. The dogs ended up traumatized and terrified, and had very short and unsuccessful careers in the military. They were later replaced by other animals, such as rats.

Throughout the Second World War, dogs also helped to locate traps, ambushes, weapon stores, and even snipers. These dogs could locate traps from a mile away, and were much more effective than humans. They were also used as guard dogs to help defend camps and military bases.

Some dogs became true heroes of the era. One example is Chips, a mutt in the American army that received several medals that were normally reserved for humans. While the government later rescinded these awards, his battalion made sure to shower him with honors after the war.

Chips served on the front lines in some of the most intense areas of conflict, including North Africa, Sicily, Germany and France. Among his greatest victories was the day he saved an entire battalion of American soldiers by infiltrating an Italian machine-gun post and neutralizing it. He was finally able to return home at the end of the war.

However, many dogs were not so lucky. During the Second World War, scientists also used dogs in animal experimentation, both for testing new drugs and chemical weapons. Unfortunately, due to severe food shortages, many people had to cull their pets in countries such as the United Kingdom.

The number of canine casualties during the Second World War was huge. Throughout history, millions of dogs have died in battle, with many actively participating in military work. And dogs aren’t the only animals that have participated in human conflicts. Decades on, we remember these animals as heroes, with hundreds of monuments and books paying homage to them.

5 Jobs for Dogs
Dogs are amazing, and can be so much more than just our pets. That's why today, we're going to show you 5 jobs for dogs, things they can do to help society. Read more »
Link copied!
Interesting Articles
Dogs
Meet the Wetterhoun: The Frisian Water Dog