The Role of Dogs in Prehistoric Times

In prehistoric times, dogs played the role of protectors, shepherds, hunters, and human companions. Discover when this inseparable relationship of symbiosis was forged. 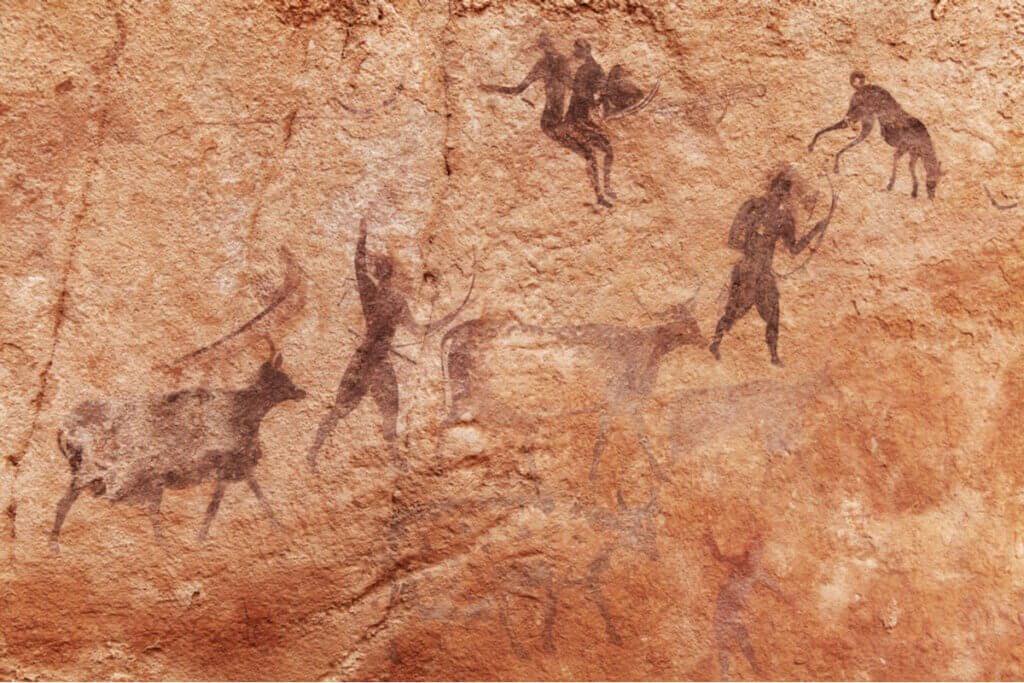 The dog has always had a special role in human life, from prehistoric times to the present. As a protector, warner, grazer, worker, and companion animal, dogs have helped humans since their origins.

Do you know when this ancestral symbiosis began? Have you ever wondered what signs exist of the coexistence between people and dogs in the past? Here we give you answers to those questions and many more.

Cave paintings and fossil remains give clues to archaeologists about what life was like for our ancestors. The first evidence of living together with dogs dates back some 11,500 years, in the Asian continent.

Despite this, experts believe that the coexistence and domestication of dogs began much earlier. The introduction of dogs as hunting assistants may explain the great increase of hares and other small prey in the archaeological remains of the Neolithic period.

A concrete case is the site of Shubayqa 6 in the northeast of Jordan. Bones found there had signs of having passed through the digestive tract of an animal. These bones were too big for humans to have swallowed them. Therefore, experts believe that dogs living and eating alongside humans could have digested them.

These dogs didn’t live away from the prehistoric settlement. Rather, they participated in all aspects of daily life. This could explain several things. For example, the presence of their remains and the increase in small prey they helped to hunt. At the same time, it would explain the food they digested and even fossilized feces in prehistoric human sites.

Dogs in the cave paintings

In the Arabian Peninsula, we can also find evidence of hunting with dogs during prehistoric times. In these 8,000-year-old cave paintings, dogs appear accompanying humans while hunting gazelles, ibexes, and equids, or guarding livestock on several occasions.

The most curious thing is that these dogs even appear with collars around their necks. What’s more, they look similar to the Canaan dog. In other words, they all have erect ears, short muzzles, very angular chests, and curled tails.

The friendship of the dog and the human in prehistoric times

Dogs were not only work animals. We know this since archaeological remains suggest that there were affective bonds between dogs and humans already in prehistoric times. For example, we can consider the tomb of Bonn-Oberkassel, which dates back about 14,000 years. This tomb contained the skeletons of an older man, a younger woman, and the incomplete remains of two dogs.

The fact of sharing of the tomb isn’t the only thing that attracts attention. In addition, the teeth of one of the younger dogs indicate that it suffered from a distemper infection. This is probably what ended the animal’s life. However, it seems that the disease took a long time to become serious. Therefore, the animal survived longer than expected.

This fact leads researchers to believe that the animal was not abandoned once it became unfit for work. Rather, it managed to survive longer thanks to the attention and care it received. Therefore, the relationship between dogs and people didn’t seem to be only utilitarian. Rather, they developed emotional and affective bonds.

Although dogs originated from wolves, domestication and artificial selection have made them very different from prehistoric dogs. In fact, dogs are more closely related to each other than any of them are to wolves today.

There are a number of factors that have made the link between dogs and our own species strong. These include the retention of youthful characters, docility, and social skills acquired after thousands of years with humans. This is true despite the fact that in their initial role in prehistory they began as working animals.

Thus, each dog’s owner has an evolutionary partner in his own home. Dogs have learned to integrate into human societies with purposes far beyond utilitarianism. They know how to interpret our language and have even saved lives in many cases.

One thing is clear to us every time we look a dog in the eye… Society, as we know it today, would not be the same if this species hadn’t existed.

Frozen Prehistoric Horse Discovered in Siberia
A group of scientists in Siberia have managed to rescue the intact remains of a prehistoric horse. It belongs to the Lena species (Equus lenensis). Read more »
Link copied!
Interesting Articles
Dogs
7 Causes of Suffocation in Dogs